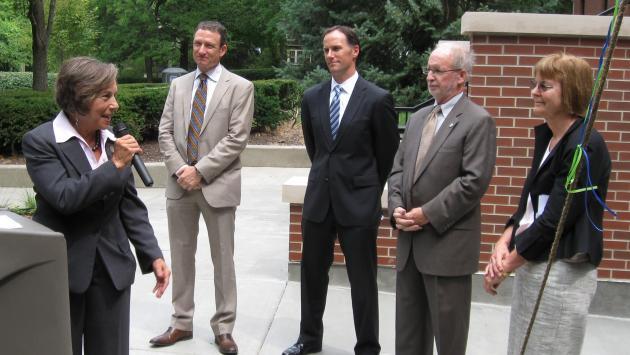 The NorthShore University HealthSystem is donating $1.8 million to support the establishment of a new federally qualified community health center to serve low-income patients in Evanston and Skokie.

The contribution supplements a $650,000 annual grant from the federal government to the Erie Family Health Center, the group that will operate the local center, which will open temporary quarters Oct. 22 on the ground floor of the Civic Center before moving to an undetermined permanent location in Evanston next year.

City Manager Wally Bobkiewicz told Evanston Now that Erie will rent the Civic Center space for $1 and that the tenant buildout will be paid for by Erie, aided by the grant from NorthShore.

“No Evanston taxpayer money or staff” will be allocated to the establishment of the temporary facility, he said, although Erie will not be charged for utilities or for use of the city’s internet wifi system.

J. P. Gallagher, president of NorthShore Evanston Hospital, made the announcement Wednesday at a “celebration” on the lawn behind the civic center, attended by a slew of local politicians, including the mayors of Evanston and Skokie, several aldermen, state legislators, and U.S. Rep. Jan Schakowsky.

Dr. Lee Francis, president and chief executive officer of Erie, said the new facility “will help us make a real impact on the health and welfare of residents of Evanston and Skokie.”

He said that, initially, Erie will provide pediatric, family, and dental services at the civic center location before moving to their permanent location that will provide additional services.

Although community health centers have been around for 45 years, they were given new life by the federal Affordable Care Act, commonly known as Obamacare.

Last year, more than 1,100 community health centers were in operation throughout the country, providing care to approximately 20.2 million patients, up from 18.8 million in 2009, according to the U. S. Department of Health and Human Services.

The Affordable Care Act established the Community Health Center Fund that provides $11 billion over a five-year period for the operation, expansion, and construction of health centers nationwide, to improve the quality and accessibility of health care.

The grant to Evanston was one of 219 new grants nationwide and one of 11 in the State of Illinois that were included in this year’s federal budget.  The President’s budget request for fiscal year 2013, not yet approved by Congress, includes more than $3 billion for health centers to provide preventive and primary health care services to an estimated 21 million patients nationwide.

Local advocacy for the center also came from Evanston 150, the community organization that identified 10 “big ideas” to celebrate Evanston’s 150th anniversary in 2013. One of the 10 was to “establish a community health center to provide high quality and affordable medical, dental, and preventive care for all, regardless of ability to pay, for those who are uninsured and underinsured.”

The community health care model has been shown to reduce the use of costlier providers of care, such as hospital emergency rooms, according to the federal agency. Therefore, they play a key role in the objective of reducing the nation’s health care bill.