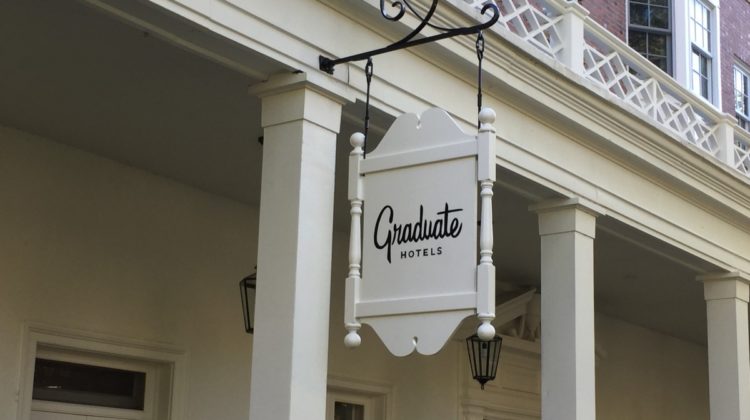 Evanston has a new boutique hotel that opened this morning, at a time when hotels nationwide are suffering financially due to the coronavirus pandemic.

The Graduate Evanston, part of the 28-property Graduate Hotel chain, is in the former Homestead Hotel on Hinman Avenue near the Northwestern University Campus.

Graduate remodeled the 92-year-old building, which is on the National Register of Historic Places, into a 119-room hotel.

A news release says the facility is “designed in homage to Evanston literary figures old and new,” featuring Midwestern-themed artwork, various tributes to Evanston and Northwestern, and a restaurant called the “Trophy Room.”

General Manager Eric Smith says, “We have a very unique niche. No one else in Evanston does what we do.”

The opening comes one day after the American Hotel and Lodging Association sent a letter to President Donald Trump, asking for financial assistance for the troubled industry.

“The health and economic crisis has wreaked havoc on hotels,” the letter says, adding 30% of hotel employees are either laid off or on furlough, and “more than two-thirds of hotels report they will only be able to last six more months” without any financial relief.

Smith says his hotel will be “smart and cost-efficient” to get through the coronavirus crisis. He says there is a rigorous health and safety program at Graduate Evanston, and “we will come out of this on the upswing when the pandemic is over.”

He says the hotel has 15 employees now, a “small but mighty team,” all from Evanston and nearby. He expects staff size to double once the pandemic has passed.

The Graduate Hotel chain was founded in 2014. CEO Ben Weprin received his MBA from Northwestern, so Smith says opening here has a special meaning.

There are 15 guests registered for tonight and tomorrow night, Smith says, a good start considering the economy.

Every Graduate hotel is in a college town, and some of those facilities are renting to students for the semester, to help make it through the tough times. However, because school at Northwestern is already under way, Graduate Evanston has no plans to do that.

Graduate hotels are themed according to the college community where they are located. The hotel here has “subtle shades of Northwestern Purple” throughout the guest rooms, according to the release. The Graduate in Ann Arbor, Michigan pays tribute to the Maize and Blue of the U of M, and so on.

Every Graduate hotel is different, Smith says. “The only thing they have in common is the ‘do not disturb’ sign.”