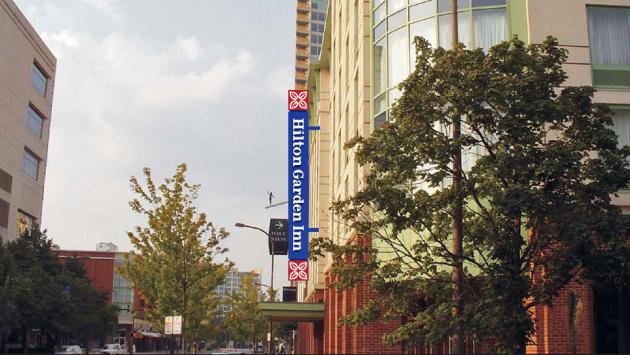 The vote was postponed to give staff time to see whether city money requested by the hotel's owners to cover half the cost of the sign could be taken from a different account.

But some committee members also voiced concerns about the size of the sign and whether the city should pick up any of the tab for the project.

Even if the EDC eventually approves funding for the project, the plan would still require approval of the city's Sign Review Committee and the full City Council. 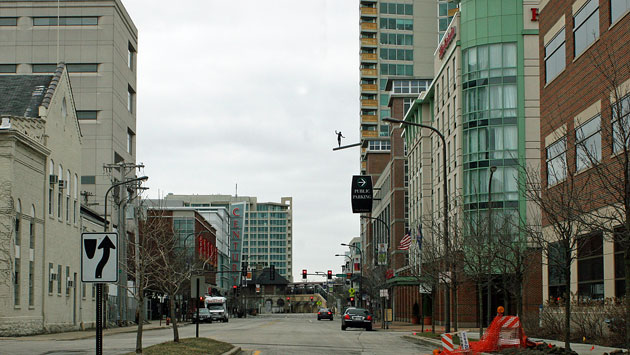 Top: A rendering showing how the proposed blade sign might look attached to the hotel's Maple Avenue facade. Above: The streetscape today, also looking south on Maple.

The hotel currently has a sign over its entry canopy, and two more along its roofline at the northeast corner of the building.

But committee members seemed to agree that the hotel is still hard to spot for visitors arriving in town and driving up or down Maple Avenue.

City staff proposed that the city provide $18,500 for the project — half of its estimated total cost. Staff proposed funding the grant from the Economic Development Fund account, but Alderman Ann Rainey, 8th Ward, suggested it might better be paid for from funds left over from the recently closed tax increment financing district that included the hotel site.

EDC member Seth Freeman said the proposed sign is way too large. "People could see it from Noyes Street" — seven blocks to the north, Freeman claimed. "The sign is out of place for Evanston."

Wynne, who's also head of the city's parking committee, said she also wanted to make sure the sign didn't obscure the sign marking the entrance to the city's Maple Avenue parking garage, just south of the hotel.

Earlier this week, at Tuesday's City Council meeting, Lori Keenan, a branch library activist, criticized the sign project, asking why the city would spend scarce resources to help the Hilton chain, which is owned by The Blackstone Group, a private equity firm with over $18 billion in assets.

But the hotel's general manager, David Steiner, said the hotel is only a Hilton franchisee, and the property is owned by Inland Real Estate, a much smaller firm. Inland recently reported 2010 revenues of $44 million.

Steiner works for Alliance Hospitality Management, which was hired by Inland to run the hotel.

Asked whether the hotel would go ahead with the signage change even if the city didn't fund the project, Steiner said the hotel has many other capital needs — including renovation of its guest rooms — and probably couldn't get to the sign project for five or ten years on its own.

Nancy Radzevich, the city's economic development manager, noted in a memo to the committee that the city has an interest in encouraging high occupancy rates at local hotels — because the city's hotel tax generates more than $1 million a year in revenue to the city.