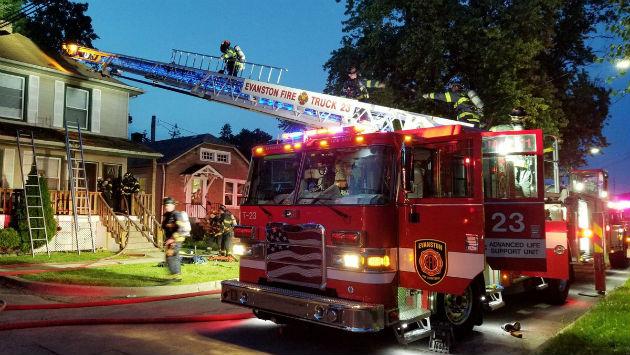 Evanston firefighters were called to a house fire at 1715 Payne St. about 9 o’clock this evening.

The crews managed to extinguish the blaze in the multi-family structure. Firefighters from Skokie and other neighboring communities also responded to the scene.

There were no immediate reports on injuries or the extent of the damage to the building.

Investigators were called to the scene to try to determine the cause and crews were leaving the scene by shortly after 10 p.m.

After further investigation, Polep says, the Engine 21 crew noticed heavy fire behind a glass block basement window. The engine company removed the window and sprayed water from the outside, keeping the fire in check, until other crews could make entry into the basement and extinguish the remaining fire.

There were no reported civilian or firefighter injuries, Polep says, but the extent of damage to the structure displaced two families, who are being assisted by Red Cross. It appears the fire started in the basement, but the cause is still under investigation.