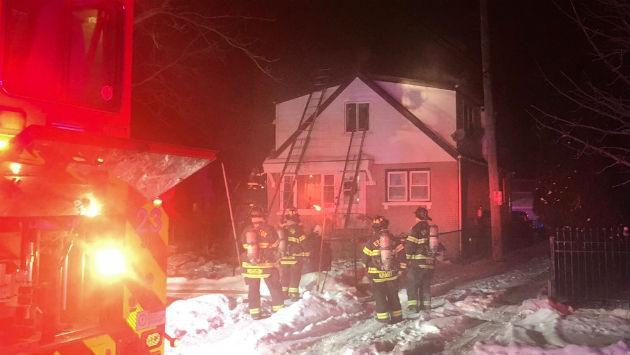 The two-family house at 2017 Foster St. in Evanston that caught fire Sunday night had once been scheduled for demolition under a government-funded program targeting blighted properties.

In 2016 the City of Evanston announced plans to demolish 13 properties, including 2017 Foster, under a program funded by the federal government with the funds distributed by the Illinois Housing Development Authority.

The city’s community development director at the time, Mark Muenzer, said the plan was to eventually provide new affordable housing units at the demolition sites through Evanston Township High School’s Geometry in Construction program or other resources.

Asked this week how it turned out the building was still standing nearly three years after the demo program was announced, Community Development Director Johanna Leonard said it turned out the grant funds weren’t utilized, because the program proved challenging to implement.

“The program was on a reimbursement basis,” Leonard said, so the city would only receive funds to cover costs incurred after it had already spent the money.

And, she added, the funding was capped at $35,000 for acquisition and demolition of each unit and required clear title, which frequently was difficult to obtain.

So the city wasn’t able to carry out any of the planned demolitions by the time the program expired in May 2018.

Leonard says the city has been using other programs to deal with blighted buildings.

One of the properties on the 2016 list, at 1729 Dodge Ave., was demolished last November and the City Council Monday night approved payment for the demolition work, which is to be covered by an IHDA grant.

That property is scheduled to become the site of a new Geometry in Construction house.

As for the building at 2017 Foster, Leonard said she didn’t have details on its status. However, records at the Cook County Recorder of Deeds indicate no liens have been recorded by the city against it for property standards violations since 2015.

A dozen people were displaced by the Sunday night fire.