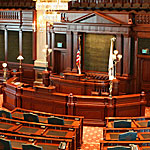 Senate Bill 1313, which passed by a 74-43 vote, would require retirees to pay for their health insurance, regardless of how long they worked for the state. The pricey perk costs Illinois more than $800 million a year.

"I think this is a good start toward doing the difficult things we have to do — to put the state of Illinois on a path toward fiscal solvency and fiscal responsibility, which is very much needed," said House Speaker Michael Madigan, D-Chicago, who sponsored the proposal.

State employees with 20 years of service now qualify for premium-free health insurance. The years of service are even lower for judges and General Assembly members, who receive the perk after serving six and four years, respectively.

"Not only are these benefits unaffordable, given today's fiscal situation, but they are far more generous than those provided by other governments to their employees and those provided by the private sector," Madigan said.

Madigan acknowledged Illinois is the only state offering free health care to state retirees after 20 years of service.

"We have for years seen this state spend money we didn't have and make commitments that we could not keep," said House Minority Leader Tom Cross, R-Oswego. "We are at that point if we do not address retiree health care, pensions, Medicaid, the budget, we will find ourselves where we can no longer fund schools, charge even more for higher education, not be able to protect our communities."

So far its unknown how much retirees would pay under the new measure. One possibility is having premiums set on a sliding scale based on income.

The legislation places the price-setting power in the hands of the state Department of Central Management Services. The Joint Committee on Administrative Rules would have veto power on any recommendations from the department.

House lawmakers debated the bill for about an hour. Opponents argued it breaks a promise to retirees. Retirees last week in Springfield pointed out that free doesn't always mean free, and many still have to pay the cost of prescriptions and co-pays.

The bill heads to the Senate.