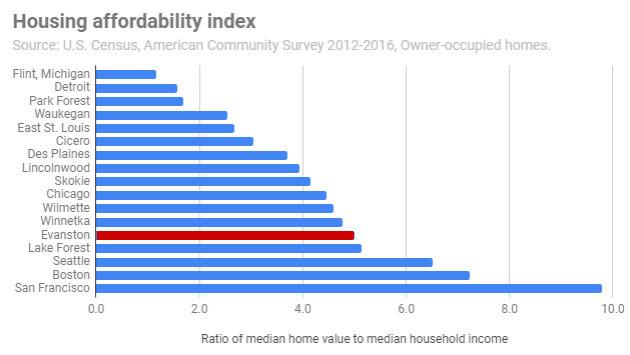 A recent Brookings Institution study suggests that, if Evanston were its own metro area, it would be among the 25 percent of most costly areas for home ownership in the nation.

Looking at city-level data for selected communities, as Evanston Now did in the chart at the top of this story, yields an even wider range — from 1.2 in Flint, Michigan, to 9.8 in San Francisco.

The Brookings study says that the cost of the median-priced home in the Chicago metro region, at 3.76 times median household income, is within what it describes as the normal range — in the middle half of the distribution — although it’s toward the higher end of that segment.

For Evanston, the median home price is 5 times the median household income. That wouldn’t rank Evanston in Brookings top 10 percent “very high” category, but puts it well within the “high” range.

The Brookings study notes that while extremely high cost ratios make it hard to buy a home, extremely low ones make it very hard for homeowners to build housing weath.

It also suggests that nationwide the average ratio of housing value to income has ranged historically from 2.6 to 4.

The authors of the study argue that high housing prices result from excessive land use regulation and other policy choices of local governments.

Making housing more affordalbe to middle-income families, they suggest, will require local governments “to revise their zoning and allow more housing to be built, especially near jobs and transportation.”

Evanston officials are now considering a variety of possible zoning code changes that are aimed at achieving those goals, but it’s not yet clear how many changes will win approval or how effective they will turn out to be.