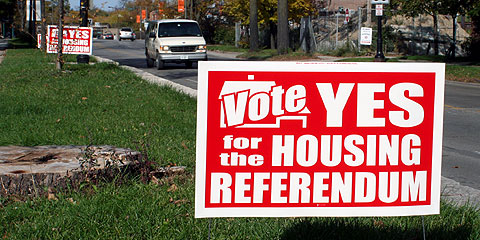 Yard signs backing a 20 percent increase in Evanston’s real estate transfer tax for affordable housing have sprouted outside the Evanston YWCA, and letters from a local realtor’s group opposing the increase are showing up in mailboxes around town.

All the talk about whether Evanstonians should fork over more tax dollars to fund affordable housing raises the question: How tough is it to afford a home here?

The bureau’s numbers show that the mismatch between income and housing costs is worse in Evanston than it is for Illinois as a whole, but Evanston’s numbers come close to matching those for Chicago.

In Evanston 39.4 percent of home owners spend 30 percent or more of their income on housing. In Chicago it’s 42.8 percent. For Illinois as a whole it’s 30.8 percent.

In Evanston 55.1 percent of renters spend 30 percent or more of their income on housing. In Chicago it’s 50.9 percent. For Illinois as a whole its 46.1 percent.

How does Illinois compare with the rest of the nation? Illinois ranks 10th in the nation in the percentage of residents with a mortgage who pay 30 percent or more of their income for housing. Here 37.2 percent pay that much, compared to 47.7 percent in California, the state with the highest housing cost burden, and 21.5 percent in North Dakota, the least costly state.

Back in 2000, 25.7 percent of Illinois single-family homeowners with mortgages reported spending 30 percent or more of their incomes on housing.

(The Census Bureau included condo owners in the 2005 figures, but not the 2000 numbers, so they are not precisely comparable.)

A New York Times article provides examples from around the country of towns where the housing cost crunch is even more severe than it is in Evanston or Chicago.

Fortunately for Evanston residents, the median family income here has increased nearly as fast as the median home price over the past five years.

However, an upward trend in mortgage rates since 2000 has reduced somewhat the amount of house that a given family income will buy.