A study from the Center for Neighborhood Technology reverses traditional conclusions about the cost of housing.

The cash cost of buying a home tends to be much lower in distant suburbs than close to the urban center.

But the CNT study found that transportation costs increase dramatically in outlying areas because of the dispersal of jobs, shopping and other amenities. 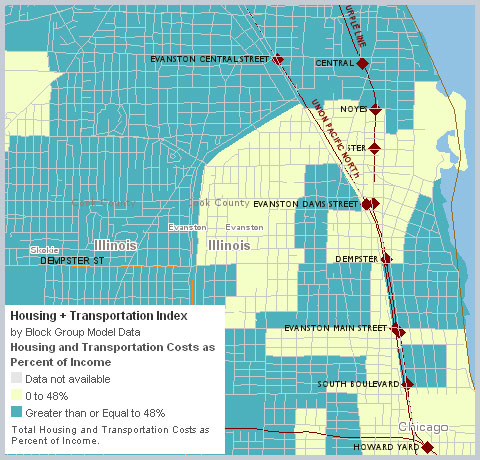 While not all of Evanston is judged affordable by the study criteria, it is the only North Shore community with significant areas that were considered affordable.

That outcome, the study concludes, is a result of a combination of pockets of relatively inexpensive homes and apartments, ready access to public transportation, and population density that means everyday trips typically cover shorter distances.

Residents in transit-oriented neighborhoods in Evanston tend to have fewer cars per household than their suburban neighbors, often travel shorter distances to work and tend to have more jobs to choose from close to home.

The study, which analyzes U.S. Census data, was funded by The Brookings Institution’s Urban Market Initiative.