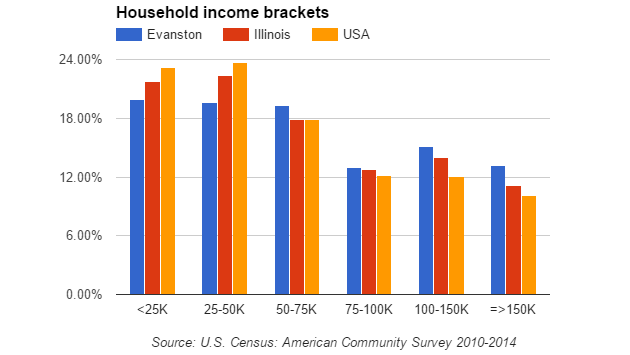 Evanston mayoral candidates, who all say they favor some form of affordable housing policy, shied away from the idea of trying to attract more people of any particular income group to town.

Asked in an Evanston Now questionnaire about affordable housing, the candidates differed in the strategies they favored, but all approved of some techniques they claimed would make housing more affordable here.

But when asked if they wanted to attract more people of any particular income level to town, the candidates generally demurred.

Three — Gary Gaspard, Jeff Smith and Mark Tendam — chose the option “Government policy should not try to control the income distribution of the city’s population.”

One, Brian Miller, checked boxes indicating a desire to attract more people of all income groups.

And one, Steve Hagerty, said the city should seek to maintain its current income distribution.

Government policy, of course, cannot help but have an impact on which income groups are attracted to a community. An array of decisions — from large lot size requirements to whether “tiny homes” are allowed — all help shape the income level of people who move to a community.

Here are the open-ended responses the candidates gave to the incomes question.

The government generally exist to promote general welfare of all citizens and secure liberty and security for all. Therefore, government policy should not try to control income distribution of the city’s population.

I believe Evanston’s diversity is one of its core strengths – and that includes both racial and economic diversity. I refer readers to my proposals to enhance diversity in our community:  In the “Trump era” respecting and enhancing our diversity must be one of our most important priorities. It reflects who we are and why we love Evanston.

Evanston should seek to attract all income groups in order to ensure that we maintain a diverse and vibrant city.

Evanston should work to maintain a supply of affordable housing, and not tax folks out of town, and should be more proactive in marketing to some demographic groups but not necessarily by income bracket.

Also, ultimately, home location is largely personal choice; there are limits to how much government, especially local government, can or should engineer. I would check “seek to maintain” except that the charts show local, state, and national middle class squeeze that I believe government (more national than local) should be working to reverse rather than “maintain.”

I don’t think government should seek to control the income distribution of the city’s population.

We should make sure that there are opportunities for people of all income levels by promoting jobs that pay a livable wage.

We can provide education and training opportunities that will help residents advance in their careers and support childcare and transportation programs to rid obstacles to their workday.