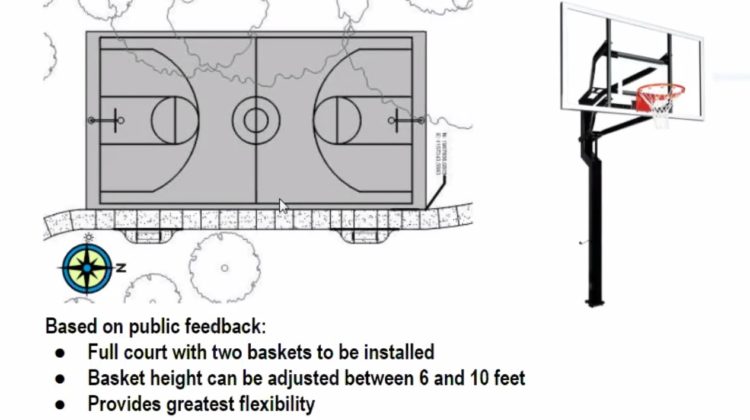 A slide from a city staff presentation about the park plans.

Neighbors of McCulloch Park in northeast Evanston got into an extended discussion Wednesday night about basketball hoops in a planned renovation of the park.

The park runs between Jenks and Livingston streets at midblock between Broadway and Eastwood avenues. It now has a full-size basketball court, but a full-size backboard and hoop only at one end.

As part of a planned $1 million renovation of the park next year, city staff plans to rebuild the basketball court and equip it with two hoops.

At the online 7th Ward meeting, John Twohey and some other neighbors complained about that — suggesting that enabling full-court basketball play would discourage use of the court by younger children who now can use it for skateboarding, scooters, rollerblading and learning how to ride bikes.

But Alderman Eleanor Revelle, 7th Ward, said that at a public meeting last spring on the renovation plans, while some residents strongly favored maintaining the existing one-hoop arrangement, others wanted to enable full-court play.

She said the solution staff came up with was to purchase new backboards that can be adjusted in height from the regulation 10 feet to as low as 6 feet.

Parks Director Lawrence Hemingway said one of the most challenging groups for his department to program for is teenagers, and one of the top activities they want is to play basketball.

He said parks staff could monitor the situation and change the height of the backboards as needed.

Revelle said that while there are many young children in the neighborhood now, if the area shifts in a few years to have mostly teenagers, more neighbors might want to have both hoops at full height.

But she said for now the plan is to set one at full height and the other at a much lower level for use by smaller children.

The park renovation project is moving ahead, despite the city’s current pandemic-related budget constraints, City Engineer Lara Biggs said, because much of the existing playground equipment has deteriorated to the point that it has become a safety hazard and needs to be removed.

But mayoral candidate Lori Keenan said “it really seems tone deaf” to be spending a million on a park at a time when many residents can’t pay rent and the city is raising taxes.

Biggs said that because the park project is being funded by issuing bonds, the cost of the project won’t impact tax bills until 2022. Payment on city bonds is generally spread over 20 years.