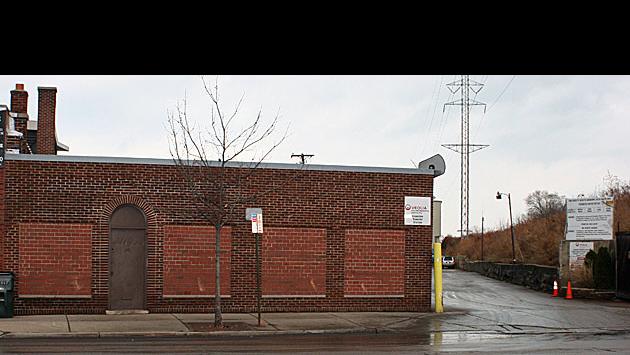 Behind a bricked-up storefront at 1711 Church St. in Evanston is an industrial operation that's been the subject of a lot of controversy recently. Here's a photo tour of what goes on at the Veolia Environmental Services transfer station.

Down a long driveway that parallels the old Mayfair railroad embankment is what some neighbors describe as a "tin shed" but Veolia officials say is a $3.5 million transfer station building, constructed a few years ago in response to complaints that the trash transfer operation was taking place in the open air.

After passing over a scales that determines the weight of the load and thus how much the truck's owner will pay to dump it,

garbage route trucks back into the open side of the transfer station building. The truck operator pulls a few levers and the back end of the vehicle opens to dump its load onto the floor.

A typical truck may have as much as 6 to 8 tons of garbage, Veolia officials say.

A big front-end loader, driven by one of three Veolia workers at the transfer station, picks up the trash from the floor and carries it to the back of the building where it's dumped into a pit.

Waiting inside the pit is a semi-trailer truck that can carry up to around 20 tons of trash off to a Veolia-owned landfill in Rockford.

Having the transfer station, the only one in Evanston, cuts labor costs and other expenses for trash haulers, compared to having the garbage route trucks deliver the trash directly to a landfill.

As a garbage truck pull out to leave, the upper floors of the Church Street Village town homes can be seen just across the railroad embankment.

Veolia uses a street sweeper to clean up around the plant site, and company managers say they send out workers on foot to pick up any trash that may blow around the neighborhood.

But, although Veolia has announced plans to add more plantings to the embankment to shield the homes from the view of the transfer station, town home residents and other neighbors complain that still more needs to be done to reduce noise and odor problems they say are caused by the Veolia operation, if it's to remain in Evanston.