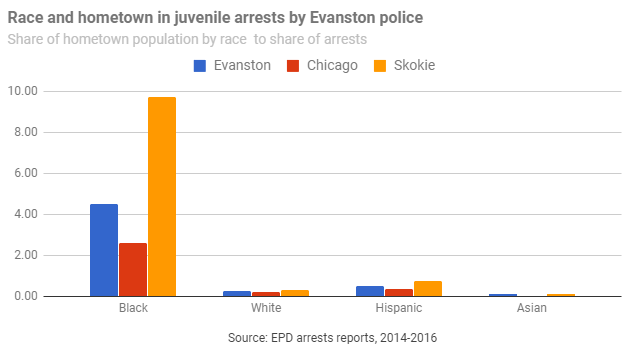 Although a third of the juveniles arrested by Evanston police live outside of Evanston, excluding them from the analysis doesn’t much change the overall disparity in arrest rates by race.

In response to a Freedom of Information Act request by Evanston Now, the Evanston Police Department provided data on the hometowns of juveniles arrested between 2014 and 2016.

But some fairly large differences emerged in the rate at which blacks youths were arrested compared to their share of the population in their home communities.

Blacks who live in Evanston were four-and-a-half times more likely to be arrested by Evanston police than would be predicted by their share of Evanston’s population They experienced 74.5 percent of arrests of Evanstonians while blacks represent only 16.6 percent of the Evanston population in the latest data from the Census Bureau’s American Community Survey.

While the data from the police department provided zip codes for only a subset of all arrests, there’s some indication from the data that a larger share of the Chicago juveniles arrested came from the Rogers Park and West Ridge zip codes, which have a lower percentage of black residents than Chicago as a whole.

Other data from the police department indicates that when crime victims in Evanston are able to provide a description of a suspect, they are far more likely to say the suspect was black than a member of any other racial or ethnic group.