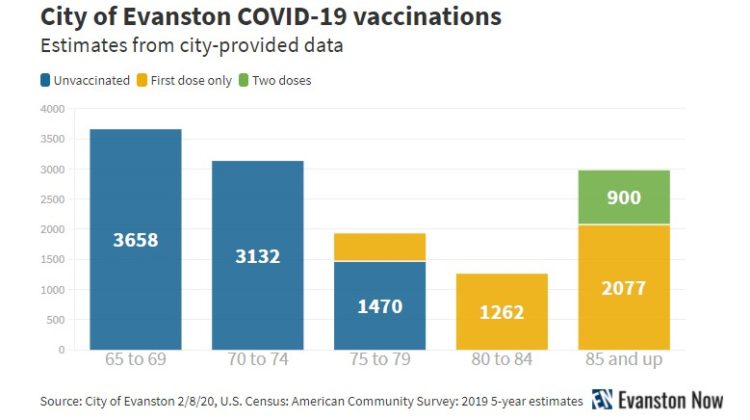 Evanston Now readers have been asking how many Evanston residents has the city vaccinated against COVID-19 so far?

The short answer is, we really don’t know, because we’ve been unable to get that data from the city yet.

But based on some figures Mayor Steve Hagerty mentioned at Monday night’s City Council meeting, we can make some very tentative estimates.

The city says it has distributed a total of 8,900 doses of the vaccine so far. A little less than half went to health care workers and other high-priority people in Phase 1a of the vaccination program.

Hagerty says that for the age-based distribution program in Phase 1b, the city has given first doses to just under 3,800 people and second doses to a little more than 900.

Those doses have been given starting with the oldest residents and then working down the age ladder toward age 65.

Using data from the U.S. Census Bureau’s American Community Survey about the age breakdown of Evanston’s population, Evanston Now has charted how that distribution would look, assuming only Evanston residents got those shots and assuming that the city’s program was the only source of shots for residents.

However, we know that some Evanston residents, especially among those in the oldest age groups, are in long term care facilities. They are supposed to receive their vaccinations under a separate federal program being run by the CVS and Walgreens pharmacy chains.

We also know that the Evanston program’s shots are available to people who work but don’t live in Evanston, although presumably the number of people still working in the oldest age groups is relatively small.

And some Evanston residents may be getting their shots through other programs around the region.

Hagerty said that the city is currently offering shots to persons 77 years of age and up and is focusing for a vaccination session today on giving second shots to some of the people in that age group.

He also said the city expects to be able to start vaccinating people in the 74 to 76 age range “soon,” depending on the availability of additional vaccine doses.

And he said he doesn’t anticipate a substantial increase in the flow of vaccines until around the start of next month.

With the vaccination program in Illinois now approaching the two-month mark, that may give people in the younger range of the Phase 1b group some sense of how much longer they’ll have to wait for a shot from the city.

We’ve also asked city officials for a breakdown of vaccination data by race and ethnicity to assess how equitably the vaccination program is operating, but have not received a response as yet.

One thing we have heard from several vaccine recipients is that the city program has been running smoothly for people getting the shots — with only a very short wait at the Levy Center vaccination site.