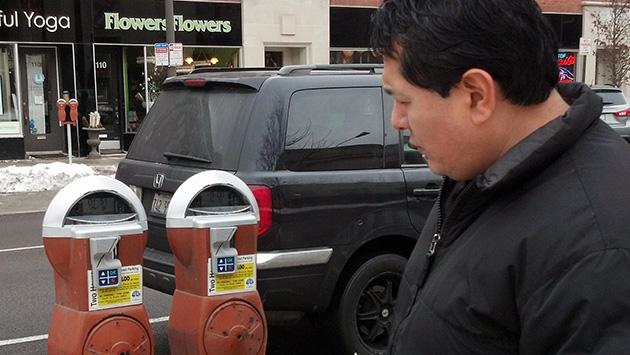 Evanston's Plan Commission got a primer this week on ideas for better managing the city's scarce parking resources.

The introduction came from Evanston resident Scott Bernstein, president and co-founder of the Center for Neighborhood Technology.

CNT is the non-profit that established the I-Go car sharing service and ran it for 10 years before selling it to the owner of Enterprise Rent-A-Car last year.

Bernstein said one step the city could take is to adopt the variable-pricing approach for parking meters advocated by Donald Shoup, the UCLA urban planning professor whose book, The High Cost of Free Parking, has made him something of a guru in the field — complete with a Facebook group for fans who call themselves Shoupistas.

Shoup says cities should vary the price of metered parking — raising it just enough in high demand areas so one or two spots are almost always open on each on block — and lowering it elsewhere so more empty spots fill up.

A video from StreetFilms focusing on the introducing the variable pricing model in San Francisco.

What's believed to be the first large-scale pilot test of the concept is underway now in San Francisco, with a report scheduled for release this spring.

Evanston is in the midst of installing new parking meters that accept credit cards and could be easily be used in a variable pricing model, but has not so far invested in the in-pavement sensors that San Francisco is using to provide real-time monitoring of whether spaces are occupied.

Variable pricing advocates also argue that parking garage rates should be cheaper than on-street rates — to compensate drivers for the inconvenience of not parking right in front of their destination.

The bane of many Evanstonians' existence is getting a parking ticket for exceeding the two-hour limit on most metered spaces.

Advocates of variable pricing says that if you set the price right so spaces are always available, you no longer need to impose time limits in an effort to force turnover.

Bernstein says that in congested parts of Evanston now "it's sort of painful to see people cruising to find a parking meter at the same time there are empty permitted spaces in parking lots."

He also suggested that the city could investigate more techniques for space sharing — perhaps using digital technology to  increase usage.

Bernstein suggested the city website could be used to provide information that encourages people to cut back on their car usage.

"A family can increase its disposable income by 10 to 20 percent by cutting back from two cars to one," Bernstein argued, and with so many transit stops, Evanston has a competitive advantage compared to other communities in making that saving feasible.

The economics of parking

Bernstein also argues, as does Shoup, that inefficient use of parking resources can have a major adverse impact on the economy.

The Center for Neighborhood Technology is one of several consultants working with King County in Washington State on a Right Size Parking project to develop new standards for parking at multi-family residential developments in the Seatle metro area.

Among the project goals are to make it possible for developers to "build more housing near transit and sell it for less."