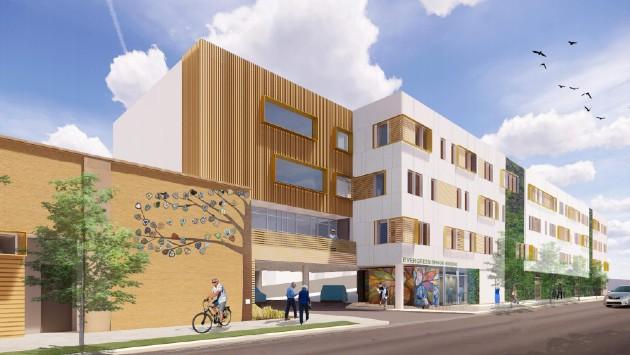 The recommendation came after developer Evergreen Real Estate Group made a variety of modifications suggested by city staff at a DAPR meeting last month.

An architect for the developer said the new designs provide more visual interest in the precast concrete facade by adding reveals and texture to the panels themselves and adding wood elements to add warmth to the appearance as well as adding screens of green plantings to the walls.

Evergreen’s director of development, David Brock, said one issue that remained to be resolved was whether the city would require that the parking garage entrances for the building at 999 to 1015 Howard St. have a 14 foot clearance to permit full-size moving vans to park off the street, or whether a shorter entrance height, sufficient for box trucks and for the buses that the development’s partner, the Council for Jewish Elderly, will be parking in the garage, would be enough.

Brock said his experience from 20 years of building senior housing developments is that the tenants in the mostly one-bedroom apartments generally move in with a U-Haul or a relative’s pickup truck. “I’ve never seen a move-in at a development like this with a tractor-trailer,”  Brock said, “That’s an expensive way to move.”

And the greater entrance height, he said, would add significantly to the building’s construction cost.

Community Development Director Johanna Leonard said the staff would have to think about that, because there’s been concern at other properties where moving trucks end up parking someplace they’re not supposed to.

City staff also raised concerns about how snow would be handled on the site and easy access for garbage truck drivers to the dumpster storage area off the alley.

Leonard said the Plan Commission, which is scheduled to review the project on Wednesday, Dec. 11, would likely “have a lot to say” about the exterior walls. She suggested incorporating more art into the building’s design could help, although conceding that “I know you can’t buy art for free.”