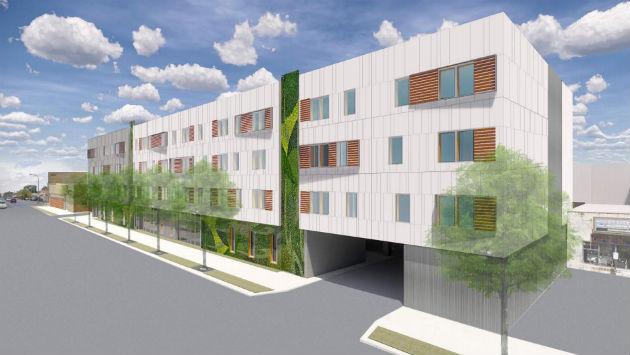 Plans for a 60-unit subsidized housing development for senior citizens in the 1000 block of Howard Street got a generally favorable review from Evanston’s Design and Project Review Committee Wednesday.

But concerns about some details of the plans — from the appearance of the precast concrete structure to controlling access to the parking deck — led the committee to postpone a vote on the project.

David Block, director of development for Evergreen Real Estate Group, said he’s asked his design team to make additional revisions to the design to make it more attractive, but he said that given the tight financing constraints for the largely state-funded affordable housing program, precast was the most practical material option.

The cost of the project is estimated at $25 million, with most of the funds coming from the Illinois Housing Development Authority, but Block said the developers will also be seeking about $2 million in assistance from the City of Evanston.

The city is in the midst of expanding the Howard Ridge tax increment financing district to include the project site. That could provide one source of city funding for the development. The TIF expansion is on next Monday’s City Council agenda.

The development is a collaboration between Evergreen and the Council for Jewish Elderly, which owns much of the property on which the new housing would be built and which will have its adult day care center at 1015 Howard renovated as part of the development.

CJE representatives said the renovations would not increase the capacity of their program, which serves 40 to 50 seniors, most of whom have cognitive impairment issues.

Block said the ownership of the development would be structured as a tax credit partnership, so the property now owned by CJE would go back on the tax rolls.

The rest of the land, which contains the long-vacant Howard Street Dairy Queen, has only been taxed at about $11,000 a year, Block said. He projected property tax on the new development would amount to about $75,000 a year.

The buiding will have two levels of parking, one mostly underground, totalling 57 spaces. The parking will be used by CJE’s buses that transport its program participants and by its employees and residents of the new senior housing.

The developers are scheduled to return to DAPR on Dec. 4, and the planned development is on the agenda for the Plan Commission’s Dec. 11 meeting. It will ultimately require City Council approval.