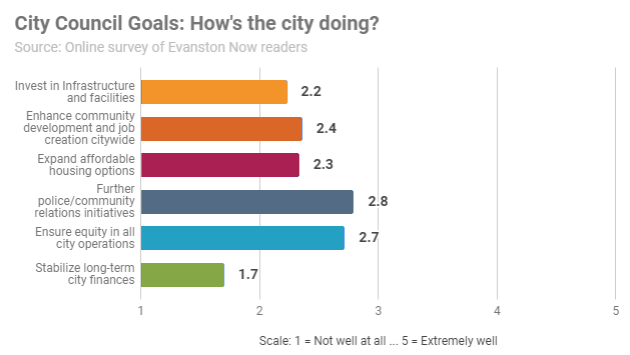 Evanston aldermen Monday night are scheduled to set City Council goals for the next two years. So we asked our readers how they think the city has done in achieving the goals they set for last year.

And on average the 42 readers who took the time to complete the brief survey said the city is doing its best job in meeting the goal of “furthering police/community relations initiatives,” followed closely by “ensuring equity in all city operations.”

By contrast they said the Council is doing much worse on “stabilizing long-term city finances.”

One reader said, “City debt is enlarging while the city continues to spend, raising taxes, fees and fines.”

Another said the council shows “a greater interest in pie-in-the-sky projects such as the new Crown Center and less in the overall condition of city infrastructure and services.”

A third said that the “pension libability will suffocate Evanston residents.”

Some readers had a more positive view.

One cited the “reports and awards received” by the city as evidence of strong progress.

And a downtown resident said, “Development is on the upswing” and there’s a “sense of progress all around the downtown area.”

But someone else urged the aldermen to “stop developers from removing the small town character” of the city and claimed that the new “luxury condos and apartments are not selling or at 100 percent occupancy.”

And another respondent said, “Stop the single-minded focus that economic development equals high-rise luxury rentals or condos that bulldoze away our beloved character.”

Asked what new goal they’d suggest for the city, several offered variations on the theme of “Get a new city manager.”

And now, let’s note some limitations of this survey:

So this should be considered equivalent to a “vox pop” story — in which a reporter stands on a street corner and asks questions of passers-by — rather than a scientifically valid sampling of the population.