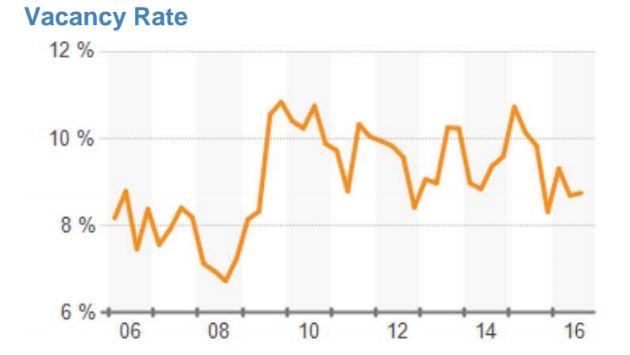 The commercial real estate information company CoStar says the vacancy rate for downtown Evanston offices is now down almost to the level of a decade ago, before the real estate market collapse that led to financial difficulties for some of the city's largest office properties.

That may be part of what's sparked the recent flurry of interest among developers in the city-owned 1714-20 Chicago Ave. parcel commonly referred to as the library parking lot.

Paul Zalmezak of the city's economic development staff says that industry experts he's spoken to suggest that as rates drift down toward 7 percent, it's time to consider adding space.

One other sign of market interest in Evanston office space is that existing properties that were formerly considered distressed are finding new buyers or going on the market seeking premium prices.

The 500 Davis building sold this spring for $18 million, an increase of 21 percent over its last sale price two years ago. And the 1007 Church building has just gone on the market seeking a price of $29 million, or more than it sold for at the market peak in 2007.

Zalmezak says most of the remaining vacant space downtown is in Class B and C properties — and that there's also a lack of contiguous space for users seeking 20,000 square feet or more.

He adds that while owners of several existing buildings — including 909 Davis, 1603 Orrington, 1007 Church and 1560 Sherman — "have done a nice job of upgrading their buildings" they are not "true Class A space" like what's under construction in the Loop and West Loop.

He says that the things companies willing to pay top dollar for office space are looking for include collaborative spaces, open floor plans and maybe an on-site gym or conference center along with state of the art systems.