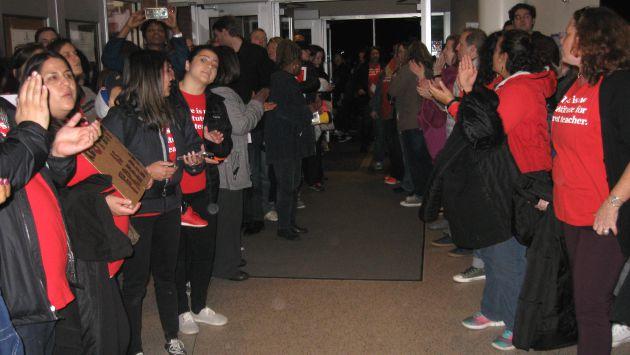 If there was any doubt that pressure is building for settlement of contract negotiations between the Evanston/Skokie School District 65 and its teachers, there was evidence aplenty displayed at Monday night’s meeting of the school board.

Hundreds of teachers, chanting and holding up hand-drawn signs, many with their own kids in tow, filled the hallways outside the board room, at 1500 McDaniel Ave., as board members, parents, and interested citizens arrived for a regular meeting of the board.

Inside the board room, a steady stream of teachers, parents, and even a retired citizen, spoke to the board, urging it to settle quickly before a strike occurs around the beginning of December. 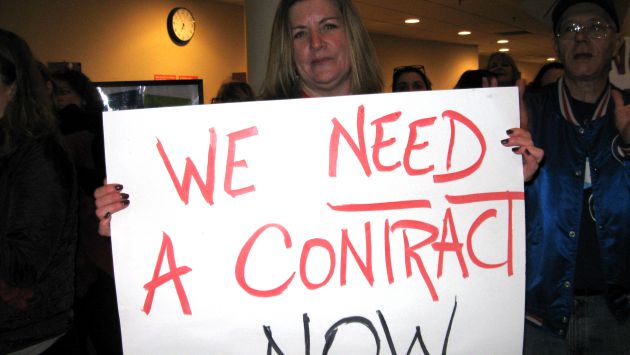 It was apparent that hardly anyone wants a strike.

The teachers were eager to continue working without an interruption in their paycheck or an unscheduled break in the execution of their lesson plans.

Board members were eager to bring the matter to a successful conclusion before they had to face the voters in the upcoming April elections.

Parents were especially eager to avoid a strike, forcing many to make expensive plans for child care during the times their kids are usually in school. Many are concerned about feeding their children, particularly those on the federal free or reduced lunch program.

Even the unaffiliated homeowners expressed fears of a decline in the value of their homes if the community was unable to reconcile the differences between the two sides, resulting in the negative publicity that accompanies a strike.

Many of them were still depressed over the results of the recent Presidential election, in which only 7 percent of the voters in Evanston saw their candidate appear triumphant.

And money for salaries was not even a big issue separating the two sides.

Teachers were advocating for more planning time and better working conditions that would enable them to do a better job in the classroom.

Board members were interested in holding down costs in fear that the state, which many considered to be dysfunctional, might saddle them with pension and other costs that they might not be in a position to meet without taking drastic action that would adversely affect the kids.

At the same time, they were hoping that teachers would find the resulting contract appealing to them, to deter the better teachers from seeking a more lucrative job elsewhere.

The biggest difference between the two sides was the length of the contract. The board is seeking a traditional four-year contract while the teachers want to hold it to a year, in the hopes that the political situation, both at the state and federal level, settles down, enabling them possibly to make a better deal next year.

In the meantime, several negotiation sessions are scheduled before the end of November, and Superintendent Paul Goren, facing his first teacher contract settlement since he came aboard last year, even agreed to meet over the weekend for as long as it takes to reach an agreement.

But in the end, all sides were quick to employ the district motto: “Every child, every day, whatever it takes.”

D65, teachers closing in on a contract