More than 125 Evanston residents gathered around a dozen tables at the Levy Center in South Evanston Thursday night to talk about downtown.

Downtown maps at each table helped focus the discussion.

After more than two hours, reporters from each table announced to the full group some fairly consistent themes.

Residents said they like the new life recent development activity has brought to downtown — with restaurants and shopping opportunities, the movie theaters, the library. And they’d like to see more — perhaps including a performing arts center. 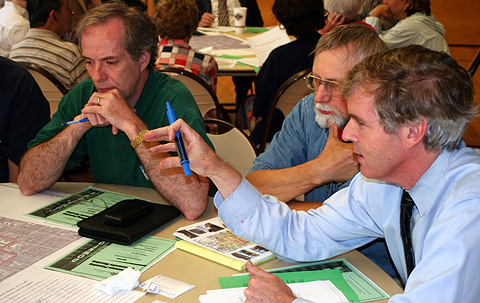 But paradoxically, many of the same people say they don’t want any more of the high-density residential construction that’s provided a critical part of the market for the restaurants and shops they love.

Several speakers said they oppose new high-rise construction and that the city should lower existing height limits in much of downtown. 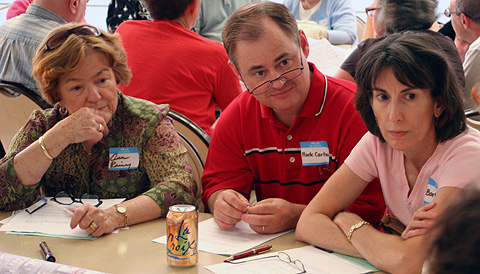 David Watkins said some folks at his table identified holes in the retail mix. "Nobody can buy underwear and socks downtown," he reported.

Mr. Watkins said folks at his table suggested focusing more residential density near the CTA and Metra stations as a way to reduce traffic congestion elsewhere in town.

But most tables seemed to favor suggestions by Plan Commissioners to preserve the low-rise nature of three so-called "traditional" areas, even though the one on Davis Street is among the last low-density property downtown adjacent to the rail stations.

Alex Sproul, one of many residents sporting a "Shouldn’t Evanston LEED?" button, suggested that the city should require all new development downtown to meet Leadership in Energy and Environmental Design standards, a theme that was echoed by speakers from most tables. 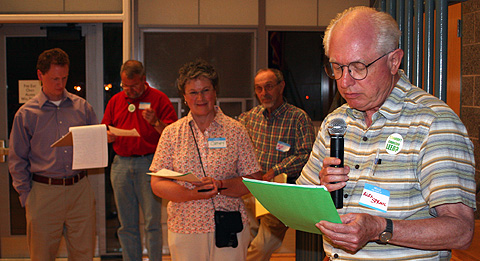 Alex Sproul reads from his notes as other table representatives wait their turn to report near the end of the meeting.

Some people said they like downtown’s brick sidewalks. Others said poor maintenance of those sidewalks makes them hazardous for pedestrians.

Some speakers said downtown commercial rents should be kept low to retain local merchants and professionals, but they offered no proposals for how to pay for such subsidies.

Aside from one reference to property being taken off the tax rolls, there was little opposition to Northwestern University in evidence at the session. Some speakers praised the energy and life that NU students bring to the downtown area and said the university was definitely an asset.

The downtown planning process kicks into high gear on Monday with the start of a week-long design charrette process that opens with a presentation at 7 p.m. in the Parasol Room at the Civic Center, 2100 Ridge Ave.