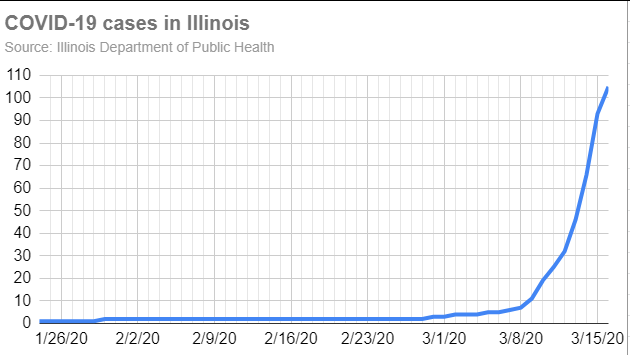 Officials this afternoon announced 12 new cases of COVID-19 coronavirus in Illinois, bringing the statewide total to 105 and Gov. J.B. Pritzker announced he’s mandating that gatherings of more than 50 people be canceled.

That limit is in line with guidelines issued by the federal Centers for Disease Control on Sunday.

And just before the governor began his news conference in Springfield this afternoon President Trump issued new guidance suggesting any gathering of more than 10 people should be cancelled.

The increase in cases today is considerably less than the 27 reported Sunday or the 20 reported on Saturday, but Pritzker and other officials were not making any claims that they are yet succeeding in “bending the curve” to reduce the speed with which the disease spreads through the state.

Illinois Department of Public Health Director Dr. Ngozi Ezike stessed the importance of social distancing measures — working at home when possible, limiting the amount of time out in the community and trying to avoid use of public transportation — in reducing tehh number of people who become sick at the same time and the risk of exhausting health care resources.

She said people should assume the disease is in your community and take steps to reduce its spread.

And she urged people to only seek medical help if their symptoms become severe.  “We ask those who have mild symptoms to stay home so the health care system is not overwhelmed.”

Information so far suggests that most COVID-19 illness is mild. Ezike said. “However, older people and people of all ages with severe chronic medical conditions, like heart disease, lung disease, and diabetes, seem to be at higher risk of developing serious illness.  It is crucial that we limit contact with older people and those with certain health conditions.”

Also today, NorthShore University HealthSystem was listed by the state as the first hospital in Illinois to have begun in-house testing for the coronavirus. The tests were develoed at Northshore’s Evanston Hospital.