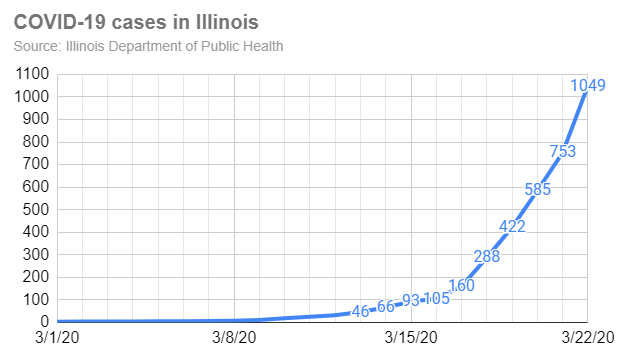 Confirmed COVID-19 cases in Illinois this afternoon stand at 1,049 — up by 296 from Saturday. Evanston now has 30 cases, up by three from Saturday.

At a news briefing this afternoon the head of the state Department of Public Health said the number of Illinois residents who have died from the disease increased by three, to a total of nine people.

Gov. J.B. Pritzker said it will take at least eight to 10 days of the stay-at-home order being in effect before there’s likely to be any sign of a decrease in the rate at which cases are growing.

The order, which went into effect Saturday evening is currently scheduled to continue through April 7.

“I want as much as everybody else to begin to go back to normal,” Pritzker said, but it will take time to see if the stringent measures are working.

The governor’s verbal battle with President Trump over the handling of the coronavirus crisis escalated today. More about that from Chicago Business.

The governor said researchers in Chicago and Champaign and across the world are working on treatments and therapies. Two or three have been in trials and one seems more effective than the others, Pritzker said, but it will take more tests to determine whether they are really effective.

Those treatments may help bend the curve — reducing the rate of infections — even more, but it will take until a vaccine is developed — likely to take a year or more — before people can be protected entirely from the disease.

One of the people included in today’s COVID-19 death count had an Evanston connection. Chicagoan John LaPlante, 80, was a member of the Unitarian Church of Evanston and his falling ill with the coronavirus led to the closure of the church, one of the first impacts of the coronavirus in Evanston.

LaPlante, who had been Chicago’s acting commissioner of transportation until the 1992 great Chicago flood, later was a vice-president and chief traffic engineer for the T.Y. Lin engineering firm.

He was mourned at a Unitarian Church online service this morning.

More about LaPlante from WBBM-TV.

Here’s the video of the governor’s news conference.