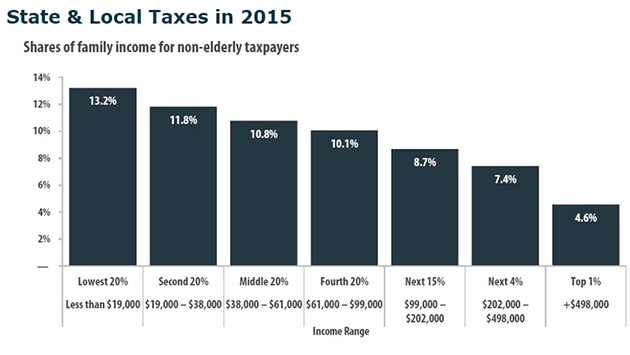 A new study from the Institute on Taxation and Economic Policy says Illinois residents face one of the most regressive state and local tax systems in the nation.

The institute — which defines regressive taxation as a system in which lower income people pay a higher percentage of their income in taxes than those who are more well to do — says Illinois ranks 5th in the nation for regressiveness — behind only Washington State, Florida, Texas and South Dakota.

The Institute included the recent rollback of the Illinois state income tax to 3.75 percent in making its calculations.

Although municipalities have some discretion in the level of taxes they impose, state governments generally specify the types of taxes available to municipalities, and generally required that they be applied at a flat rate.

Thus, although many residents describe Evanston as a progressive community, it generally imposes taxes that have a similarily disparate affect on the poor as other towns do.

There are some slight variations in taxes collected by the state on behalf of municipalities.

The home rule sales tax in Evanston and Wilmette is 1 percent — while in other communities, including Chicago and Skokie, it is 1.25 percent.

On the other hand, Evanston, Skokie and Wilmette all impose a local 6 percent tax on telecommunication services, while Chicago does not.

Update 12:55 p.m.: When it comes to local taxes that aren't collected by the state, as a reader pointed out in an email, Evanston has the highest tax on liquor in the region at 6 percent. It also has one of the highest real estate transfer tax rates in the state, at $5 per $1,000 of the sales price.

Update 2:10 p.m. 1/22/15: A different group that analyzes tax rates — the Tax Foundation — offers a critique of the methodology of the ITEP report here.