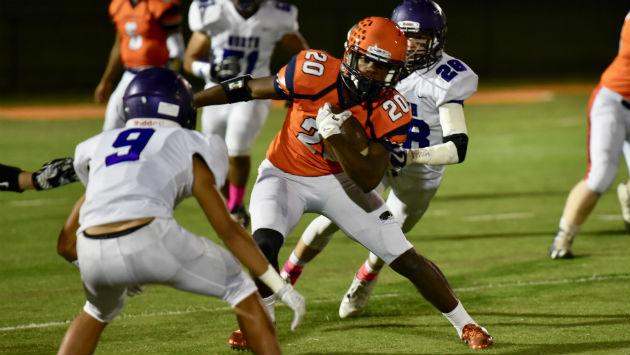 No one connected with the Evanston football program objected to sharing the credit Friday night when the Wildkits punched a ticket to the Illinois High School Association Class 8A state playoffs for the 7th time in 8 years.

But much of the credit should go to the offensive line, which again rose to the occasion as the Wildkits pounded out a 48-9 victory over Niles North Friday night at Lazier Field in their final Central Suburban League South division game.

Quarterback Drew Dawkins threw 3 touchdown passes and the defense forced 5 turnovers, but the steady progress of players like offensive linemen Sawyer Brown, Andrew Primous, Egan Schliesmann, Henry Canafax and Isadore Lobin might be the real reason the Wildkits posted a 6-3 regular season record and will watch with interest when the IHSA announces the playoff pairings on Saturday night.

Senior tackle Trey Dawkins was the only returning starter in the trenches entering the season and every high school football coach knows it’s what’s up front that counts — including Evanston head coach Mike Burzawa.

“They’re getting better every week, and that’s what you need at this point in the season,” Burzawa said. “We lost a great group of linemen from last year (including a couple of 3-year varsity starters) and we were young and inexperienced there coming into the season. But they all bought in to what we wanted and worked hard in the off-season, and they’ve really stepped up for us. 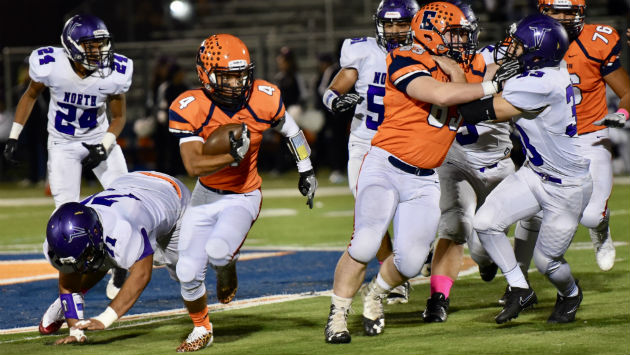 “We sat here on this field on September 28th after losing to New Trier and said we’re not going to go down again, that we’re going to win out, and we accomplished that mission. It’s really satisfying to finish on a strong note like this and this should give us momentum, even though we know we’ll have to go on the road to pull an upset in the playoffs.”

Evanston’s unknown first-round foe should take note of the fact that the guys up front helped the Kits roll up a season-high 321 yards against the Vikings, who finished 2-7 overall and didn’t win a conference game this fall. It marked the second straight week that the Wildkits ran for more than 300 yards.

Sophomore Quadre Nicholson led the way with 15 carries for 155 yards, including TD runs of 25 and 17 yards. Like most of his scoring runs this year, Nicholson wasn’t touched by an enemy tackler on either play.

Nicholson’s 25-yard burst capped a 7-play, 80-yard drive to start the game, and Nate Romero’s 42-yard interception return for a score — on a fake punt attempt by the Vikings — gave the hosts a 14-0 lead just  four minutes into the game.

Nicholson added another TD run on the second play of the second quarter, and Dawkins connected with Malik Ross on a short catch-and-run that covered 34 yards for a comfortable 28-9 halftime lead.

Dawkins delivered two more scoring passes in the second half, covering 9 yards to Roman Hunt and 22 yards to Gerrad Lamour. Backup quarterback Ben Tarpey hooked up with Devontae Hillman for a 27-yard scoring strike with 4:50 to play to conclude the scoring.

Dawkins was 8-of-14 passing for 134 yards despite the loss of his top target this season, junior Mike Axelrood. The two-way standout suffered a broken collarbone the previous week against Niles West and is out for the season.

On defense, interceptions by Romero, Lamour and Trenton Bertrand combined with fumble recoveries from Amir Abdullah and Isaac Bambi as the Kits added 5 takeaways to their impressive season total.