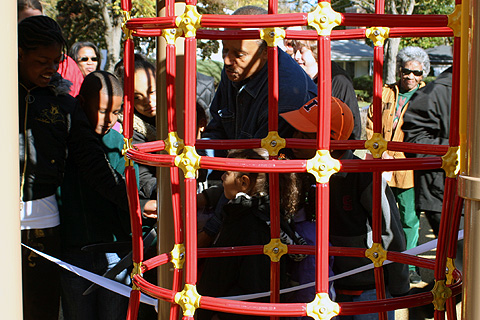 Alderman Lionel Jean-Baptiste gets help from neighborhood youngsters to cut the ceremonial ribbon ata Smith Park with a giant scissors.

The projects at Smith Park, at the corner of Ashland Avenue and Lyons Street, and Megowan Park on Hinman Avenue north of South Boulevard, were funded with general obligation bonds as part of the city’s capital improvement plan and a Community Development Block Grant.

The one-acre Smith Park, which last had a facelift in 1992, is named for Elnora Smith, a long-time teacher and physical education supervisor in Evanston elementary schools.

Plans for the renovations were developed at a series of public meetings in the neighborhoods last fall.

See more pictures of the Smith Park ceremony in this photo gallery.