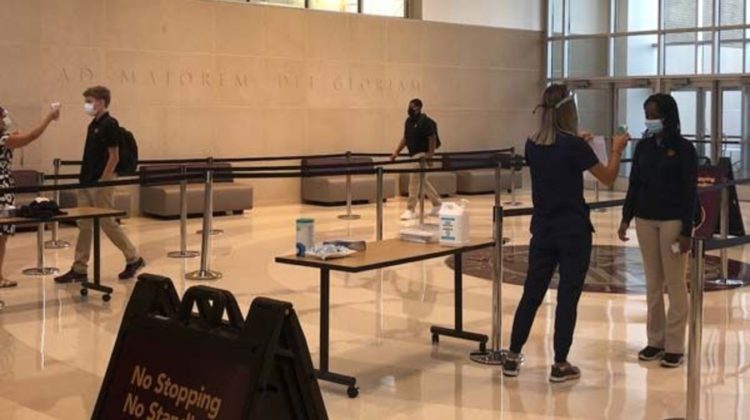 Checking temperatures at a Loyola entrance, in an image from the school's website.

Loyola Academy in Wilmette is set to resume in-person classes on Tuesday, following a two-week suspension of those classes due to a COVID-19 outbreak.

The Jesuit high school began its hybrid schedule Aug. 20, with students alternating classes in the building with remote learning at home. But Loyola suspended in-person classes just four days later, after learning six students had tested positive for COVID-19. More than 60 others had to quarantine. The entire school went on e-learning.

Loyola says there will be some changes when in-person classes start again. The hybrid model continues, but with fewer students in the building at a time. Instead of one grade inside each day, only half of that grade will attend. All grades will continue rotating through in-person and remote classes.

In an email to parents, students and staff, Principal Charlie Heintz explains the decreased class size “allows six feet of distance between students,” as well as having fewer students in school during the lunch period.

The principal also says reducing the number of students in classrooms minimizes the need for contact tracing, “which has proven to be a slow and cumbersome process.” Loyola has some 2,000 students in grades nine through 12.

School officials say the positive COVID cases were due to off campus socialization and contacts, and did not come from attending classes.
However, in his email, Heintz says “Loyola is a large community and we do not operate in a bubble.” He adds “we are not naive to the fact that additional positive COVID cases will arise.”

There is no timetable for a return to in-person schooling for everyone at once. But the principal reminds students that much of the responsibility is on them: “What you do outside the building matters greatly to the health and well-being of the entire Loyola community.”