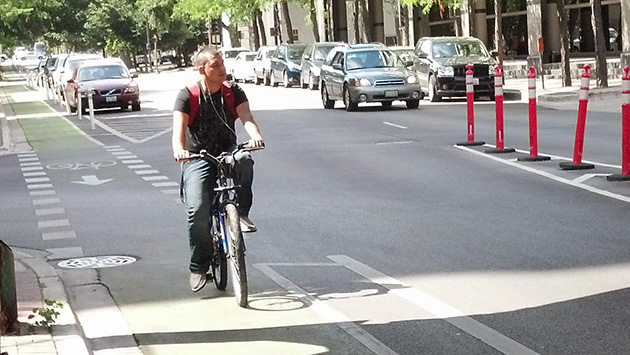 If I didn’t know better — based on the complaints at Tuesday night’s 1st Ward meeting, I would have expected to see bands of marauding cyclists bowling over pedestrians on sidewalks like ten pins.

But I did know better, because I frequently walk downtown.

He’s what I observed while walking down Church Street from Ridge to Sherman avenues, pausing for several minutes at Sherman and then retracing my steps.

I saw 14 bikes in motion, and a lot more chained to bike racks.

Of the bikes in motion: 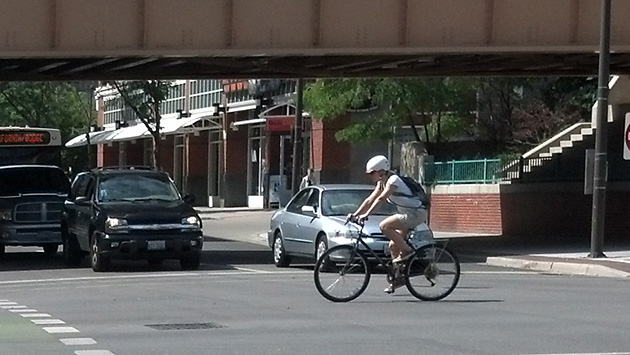 Top: Cyclist in bike lane on Church Street near Maple Avenue. (Wonder if those earbuds violate 10-9-4 (K): "No person shall ride a bicycle on a public roadway or sidewalk while using any device which would impede awareness of auditory or visual warning signals."?) Above: Cyclist crossing Church Street at Benson Avenue.

So I saw no pedestrians actually endangered by bicyclists and only one cyclist who appeared to be in technical violation of the rule barring the riding of bikes on downtown sidewalks.

It’s only a snapshot of life on our downtown streets and sidewalks — but I think it offers support for two thoughts:

Of course, then just as I was ending my sojourn I spotted the SUV driver who'd been holding his cellphone to his ear as he approached the intersection of Church Street on Ridge Avenue and distractedly pulled into the pedestrial crosswalk before stopping.

He wasn't totally distracted, though — and motioned to me with his free hand to walk around in front of him.

Where's a cop when you need one!