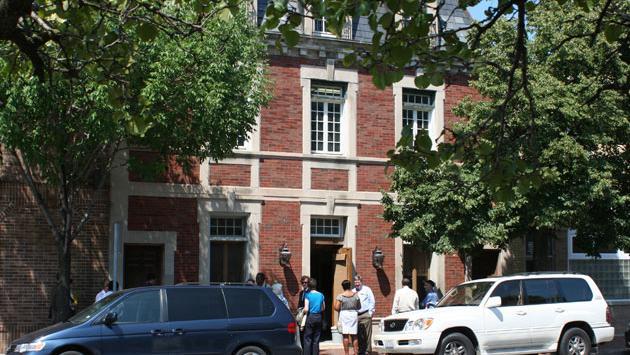 A group of Evanston contractors are proposing to turn a vacant city-owned building on Church Street into an incubator for building trades businesses.

The plan, from the Evanston North Shore Contractors Cooperative, for the building at 1817 Church St., got an encouraging reception Wednesday night from the city's Economic Development Committee.

The building, first acquired by the city in 1976, was sold in 2001 to a group that planned to create a black history center, but reclaimed by the city after the group failed to complete the project.

The contractors' group, led by John Leineweber, proposed the new project to the city's Housing and Community Development Act Committee in late April, after the city, in March, sought proposals for reuse of the building.

The contractors' plan for 1817 Church calls for a 1,000 square foot addition to the building's second floor and providing offices for the 13 businesses that belong to the group as well as office space for related businesses and conference rooms on the ground floor.

Most of the businesses are now sole proprietorships with the owners operating out of their homes.

One uncertainty in the plans, as explained by Nancy Radzevich, the city's economic development manager, involves whether the project can be made to meet requirements set by the federal Department of Housing and Community Development, which funded the earlier effort to turn the building into a museum.

City officials see HUD limitations on the sort of job creation efforts that would qualify for continued use of federal funds on the project as problemmatic. So they are exploring whether it may be simpler for the city to repay the roughly $200,000 in federal money — which then could be used for some other Community Development Block Grant project in the city.

The contractor's group is seeking a $200,000 loan from the city to rehab the building and proposing to put up $130,000 of its own for the rehab work — much in the form of "sweat equity" labor on the project.

Alderman Ann Rainey, 8th Ward, said, "We've been attempting to restore this building to the community for about 15 years now, and everything else has failed."

"This is the first legitimate response," she said, and added that members of the community development act committee "were unanimous in our support for it."

Rainey said that because HUD won't count construction jobs toward the incubator's job creation efforts, trying to do the project within the HUD guidelines "is not worth pursuing."

She added, "This money that we may have to restore to HUD, it's not going to go out of town. All HUD requires is that we replentish our own rehabilitaion fund. So its not like we're losing any money."

"The critical issue here is to get started now," Rainey said, adding that because of the deteriorated state of the property, "I fear this building going into another winter."

Top: City officials stand in front of the 1817 Church St. building a year ago today on a tour designed to spark ideas for reuse of the building.