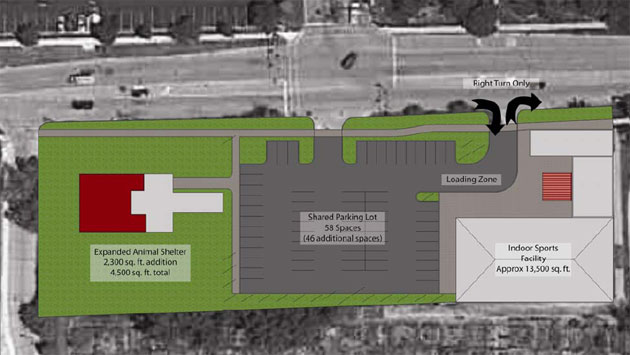 Evanston aldermen voted 6-2 Monday to move forward with a proposal to lease the city's former recycling center to non-profit groups that would turn it into an indoor youth sports facility.

The City Council rejected a recommendation from City Manager Wally Bobkiewicz to instead sell the Oakton Street property for commercial use to reduce the city's debt and generate new property tax revenue.

And it turned down an idea favored by the city's Public Works Department to use the building to store road salt.

Community and Economic Development Director Steve Griffin said the sports groups behind the winning proposal — the Evanston Baseball and Softball Association and the Evanston American Youth Soccer Association — say they'll be able to renovate operate the facility at no cost to the city.

But their proposal was omitted from the information packet for the meeting.

A summary prepared by city staff noted that the groups offered to pay $4,000 a month to help defray the city's cost for alternative storage space for equipment now stored at the recycling center.

But that works out to a "rent" for the space of $3.56 per square foot per year — substantially below the rental cost for equivalent space in the city.

The staff memo also noted that the groups' plan did not cover the cost of expand parking for the new use, which it estimated would cost about $200,000.

But the advocates claimed to have gotten 1,200 supporters to sign an online petition backing the proposal, which may have helped persuade some aldermen to go for it.

That didn't include Alderman Ann Rainey, whose 8th Ward includes the recycling center site. She said the city is faced with tremendous financial burdens and that she opposed "virtually giving away a public building" to a non-profit that "will not be returning this property to the tax rolls."

"If a for-profit sports facility operator came along who wanted to buy the property and put it on the tax rolls," Rainey said, "Then we could talk  business."

Wilson's motion directing the city staff to negotiate a lease of the center with the sports groups and to prepare a zoning amendment to permit the new use was approved with only Rainey and Alderman Delores Holmes, 5th Ward, voting no.

Holmes said she thought the vote was premature without first hearing more about the salt storage facility plan. Alderman Coleen Burrus, 9th Ward, was absent from the meeting.

Later in the evening the aldermen heard an update on the city's troubled lease arrangement with another non-profit, the group that runs the municipal golf course and has been unable to make payments on its water bill to the city.

Bobkiewicz said the group appears to be making sufficient progress in resolving its financial problems that he does not recommend trying to terminate the lease at this time.