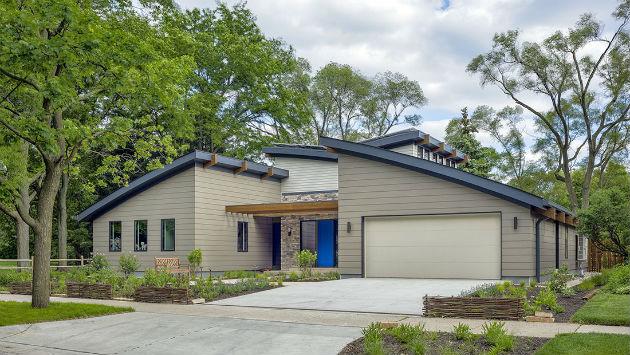 LEED, or Leadership in Energy and Environmental Design, is the worldwide rating system used to certify green buildings. Through a combination of energy-saving initiatives and sustainable construction, Pearl’s home received a 99.5 LEED point rating, exceeding the Platinum threshold by four points.

The 3,225 square foot home at 1426 Mulford St. operates off electricity alone. It has no natural gas line and emits no carbon. The 7.2-kilowatt solar panel system provides much of its energy and offsets 16,400 pounds of carbon dioxide per year — the equivalent of almost three acres of trees.

For more than 15 years, Pearl, 60, had been thinking of ways to convert her post-Korean War home into an eco-friendly dwelling space. She has led a vegan lifestyle for 28 years, and environmental conservation is an important part of her lifestyle.

Having grown up and lived in Evanston all her life, Pearl knew she wanted to retire here. “People in Evanston are really conscious about this kind of stuff,” she said. When she retired from consulting and received an inheritance in 2016, she felt the time had finally come for her dream home.

Pearl bought the property next door, then had both deconstructed and began the three-year building process. She recruited Kipnis Architecture + Planning, a firm dedicated to green and sustainable architectural practices, and Nikola of Dwelling Spaces and Places, who designed the interior with an “aging in place” concept in mind.

Nearly every detail of the home is energy-efficient, from the LED lighting to the split HVAC system that heats and cools only the parts of the house Pearl is using at a given time. Even the garage is wired for electric car charging.

Pearl and Nikola reclaimed materials from the original home, including wood paneling in the guest suite and the sinks in Pearl’s bathroom. They also purchased old, never-used household goods at Evanston Rebuilding Warehouse. Lighting fixtures in the living room are made from reclaimed wine barrels.

These touches are what put the house above and beyond the LEED Platinum level. In fact, architect Nathan Kipnis dubbed it the “Pearl level” for these extra green initiatives.

The butterfly garden, which holds native plants like periwinkle vincas and is watered using rainwater collected and kept on-site, is one of Pearl’s favorite areas.

She estimates the total cost of buying the homes, deconstructed demolition, rebuilding and certification at $1.5 million, or about $465 per square foot.

According to Kipnis, homeowners like Pearl who invest in sustainable architecture drive down costs for others. He cited solar panel prices that have plummeted from $100 in 1975 to less than one dollar per watt currently. The solar panels for the Mulford house cost $12,600 and save around $560 per year in electric costs.

“It’s more affordable than people make it out to be,” said Kipnis who is the national co-chair of the 2030 Commitment Working Group, an organization committed building green architecture. He has recently completed six similar projects in Chicago, Glencoe and Lake Zurich.