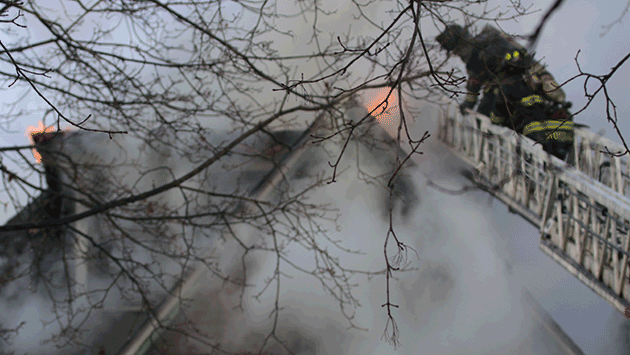 Fire Department and insurance investigators are still trying to determine the cause of a fire that severely damaged a home at 2519 Harrison St. in Evanston Friday afternoon.

Fire Division Chief Dwight Hohl this morning said it's likely to be early next week before the investigators finish their work.

Hohl says the Evanston firefighter who was taken to Evanston Hospital from the fire scene after losing consciousness while inside the smouldering home is expected to be released shortly after being held for observation overnight.

The fire destroyed much of the roof and attic level of the home, and Hohl says water and smoke damage on the first and second floors is likely to make restoration of the roughly 120-year-old home an expensive project, although he didn't have a dollar estimate of the damage.

He says the fire was first reported about 12:30 p.m. in a 911 call by a resident of the home who reported seeing smoke in the attic. The first fire units responding to the call, Hohl said, could smell smoke in the air as they turned off McDaniel Avenue onto Harrison Street.

The two adults and four children who lived in the the home got out without injury. The family had recently purchased the home and were having renovation work done at the time of the fire.

Firefighters had difficulty getting at the enclosed spaces in the attic where the fire had started and repeatedly had to clear the building and continue fighting the blaze from the outside before going back in.

Evanston Fire Chief Greg Klaiber made three calls for extra units from nearby communities to help, and units from several communities, including Glencoe, Niles, Skokie and Wilmette, responded.

It took more than three hours of efforts in near-zero temperatures to extinguish the fire.