The City Council this evening unanimously approved a zoning variation requested by the Bangladesh Islamic Community Center that it needs to take over the unfinished church building at 2045 Brown Ave. 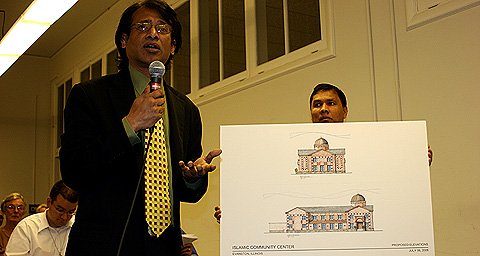 Architect Asad Hussain describes the plans for finishing the building.

Fifteen years ago, when construction of the church was approved, the church group had a lease from the city of a parking lot on land the city leases from Metropolitan Water Reclamation District across the North Shore Channel from the property. But that lease expired and theÂ city is no longer willing to agree to such leases.

So the buildingÂ now isÂ 29 parking spaces short of the 40Â required by the zoning code.

The unfinished church building as it looked last summer.

Mayor Lorraine Morton, who lives two blocks away from the site, said she was concerned about traffic congestion in the area, especially in the summer when the parks nearby are heavily used.

But Community Development Director James Wolinski said the main service at the mosque would be on Fridays from noon to 2 p.m., which he suggested would present minimal parking problems.

Group leaders said about 100 people would likely attend the Friday service, with perhaps 30 to 40 people at brief daily sunrise prayer services and even smaller numbers for four other daily prayer meetings.

Alderman Delores Holmes, 5th Ward, said that additional parking could be available if needed at the Faith Temple Church nearby and at the Family Focus center.

She said the Islamic center leaders had attended two ward meetings to explain their plans to neighbors.

Architect Asad Hussain said the group will need to fix a large number of issues with the building created when the original owners failed to follow plans approved by the city.

He said it's hard to estimate how long it will take to complete the work, but he said that after getting city permits he hopes work on the project can start this summer.

"The basement is where most of the problems are," Mr. Hussain said, "and we want to fix that first."

The group plans to provide social service programs for the community including vocational and computer skills training.

A rendering of the plannedÂ Simpson Street facade.

Mr. Wolinski said the city staff "heartily supports" the recommendation by the Zoning Board of Appeals to approve the variation request. He said the building has been under construction since 1992 and the believes the new owners "will enhance the building and be a positive addition to the community."

"This site," he added,Â "has been a less than desirable gateway into the city from McCormick Boulevard for way too long."