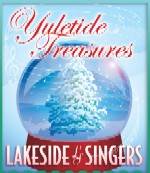 Evanstonians are getting in the holiday spirit.

If the festivities have not yet begun, start them now with The Lakeside Singers, who kick off their holiday concert series on Friday.

The Lakeside Singers, founded in 1999, is a group of professional singers determined to bring back choral music. Representing a wide range of music styles, the singers come from performing in acts such as Broadway plays, operas and commercials, and have found a home in Evanston.

This years holiday concert series begins on Friday at the Music Institute of Chicago, on Chicago Avenue, in downtown Evanston. Tickets are $30 for adults, $20 for seniors and students and $10 for children under 12. The show begins at 8 p.m.

At Pick Staiger Concert Hall on Friday, the Symphonic Band, conducted by the Bienen School of Music faculty member Ryan Nelson, will perform the works of Percy Grainger. Songs will include “The Duke of Marlborough Fanfare,” “Irish Tune from County Derry.” “Sussex Mummers Christmas Carol,” and more. Tickets are $7 for the general public, $5 for seniors and Northwestern University faculty and staff and $4 for Northwestern University students.

Next Theater is also still presenting “Well” this weekend. “Well” is a quirky memoir of Tony Award Nominee Lisa Kron’s mother, who fights for racial integration in Lansing, Mich. Weaving between Kron’s mother’s story and her own childhood, “Well” is a touching story of physical health and community. Receiving two Tony nominations when it first opened on Broadway in 2006, the play has been critically acclaimed and was included in the “Best Plays of 2004-2005.” Shows are at 2 p.m. and 8 p.m. on Saturday and 2 p.m. on Sunday.

On Sunday, the Christmas caroling can begin by singing with the Evanston Symphony when it performs a holiday concert at Evanston Township High School. “An Evanston Symphony Christmas” not only includes the ESO but also carolers, audience sing along and a visit from Santa. The show starts at 3 p.m. and tickets cost $23 for adults and $10 for children under the age of 18.

There is also plenty of time to shop this weekend. The Mitchell Museum, on Central Street, will be hosting its holiday bazaar with 21 Native American exhibitors from throughout the Chicago area selling works ranging from paintings, ceramics, beadwork, to jewelry. These one of a kind pieces will make great gifts for people of all ages. The bazaar will be on Saturday from 10 a.m. until 5 p.m. on Saturday and from 10 a.m. until 5 p.m. on Sunday. A suggested donation of $5 for adults and $2.50 for seniors and children is asked and entrance to the museum is included.

The Evanston Art Center is still hosting its annual Winter Arts and Crafts Expo. Unique handcrafted gifts from nearly 100 artists will be sold from 10 a.m. until 4 p.m, on Friday and Saturday and from 12 p.m. until 4 p.m. on Sunday. Also beginning this weekend, the EAC will be hosting a special sale with student work in the upstairs gallery.

The Central Street Business Association is also hosting a holiday open house, where participating businesses will offer holiday treats and special discounts. The whole family can participate with Santa and his elves and children can play a passport game. When stamps are collected from various locations, the children receive gifts. The open house is from 12 p.m. until 4 p.m. For more a list of participating businesses go to www.centralstreet-evanston.com.