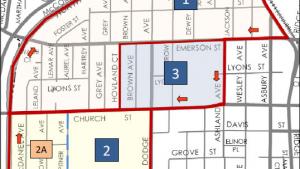 After months of considering numerous scenarios for dealing with projected increases in enrollments, the Evanston/Skokie District 65 Board of Education is scheduled to make a decision tonight, knowing in advance that a large number of voters will disagree with whatever they decide to do.

Superintendent Hardy Murphy will recommend “opening a new K-5 school in the central core and adding or converting space at the middle schools.”

Those who agree with his recommendation will say that it not only will satisfy projected space needs but that it will also right a wrong that was imposed upon an economically deprived neighborhood that lost its only public school some four decades ago, forcing its students to be bused to a number of outlying schools. 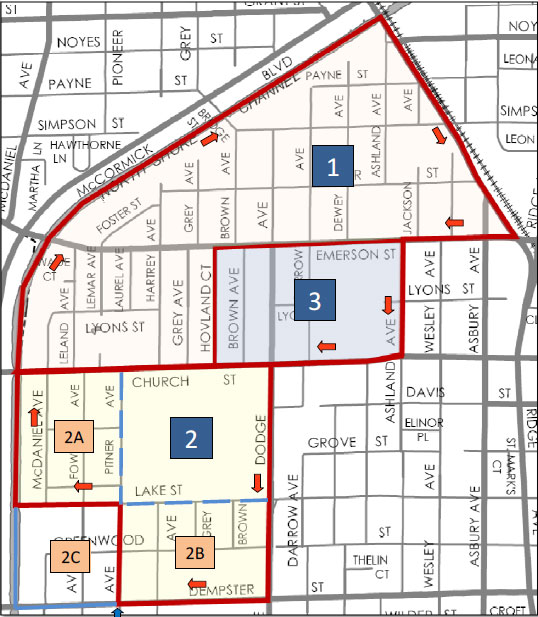 The proposed boundaries for the new school include the areas marked 1, 2A, 2B and 3 on this map. The current attendance area schools for those students include Kingsley, Lincolnwood, Orrington and Willard.

Those who disagree will say that taxpayers are already faced with increased taxes for city government, that a significant number of homes are already worth less than the amount of their mortgages, and that changes can be made gradually to accommodate more students without significantly increasing class sizes and/or inconveniencing parents through redistricting.

Besides, with little land available for residential development, the student census may decline in the future, leaving the district with a surplus of space.

Each scenario has its own set of plusses and minuses for board consideration, as well as varying effects on other schools in the district. The bottom line, however, is that a new school, plus required additions at middle schools, would likely require a referendum in a range of 35 to 38 million dollars.

The district’s chief financial officer, Dr. Mary Brown, estimates that the referendum cost for the owner of a median valued home ($285,000) would range from $69 to $73 per year for 20 years. The deadline for the board to decide on a referendum amount would be Dec. 19 in order to place it on the March primary election ballot.

Before the board meets at 7 p.m. tonight, it will hold the last of three open forums for the public to state their views. The comment period is scheduled from 6 to 7 p.m. at the district headquarters, 1500 McDaniel Ave.