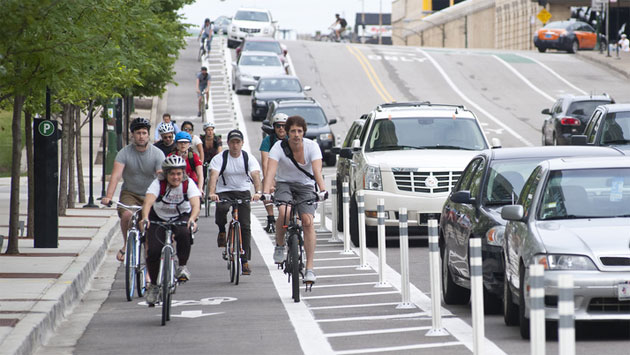 The decision to attempt to leverage local capital improvement resources with the federal grant request came after Assistant City Manager Marty Lyons said that nearly half the match money is likely to be available from the state for resurfacing the portion of Church Street that's under state control.

He also outlined a how funds could be shifted from a number of smaller city projects — some planned for Church Street and others for other parts of the city. Other money could come from the two tax increment financing districts that the street passes through.

That, he said would leave only about $300,000 that would have to be paid for by issuing additional general obligation bonds.

The grant application calls for turning Church Street into a model of "best practices" for an urban roadway — with off-street and on-street bike facilities, including a separate lane for bike traffic shielded from auto traffic by a parking lane.

That would be similar to a protected bike lane recently opened on Chicago's Kinzie Street that has drawn high praise from cyclists.

The plan also calls for innovative sustainable design elements along the roadway including rain gardens and possibly bioswale technology to treat and filter storm water.

The bike lane would be designed to continue on through Skokie and connect Evanston's lakefront with a north-south bike path running through Harms Woods.

Despite that, the council's most dedicated bike rider, Alderman Don Wilson, 4th Ward, said he couldn't support the plan because not all the funding is budgeted for. He was joined by Alderman Coleen Burrus, 9th Ward, who said she opposed the borrowing involved.

The federal grant program is considered highly competitive and officials concede it's relatively unlikely the funding will actually be awarded.