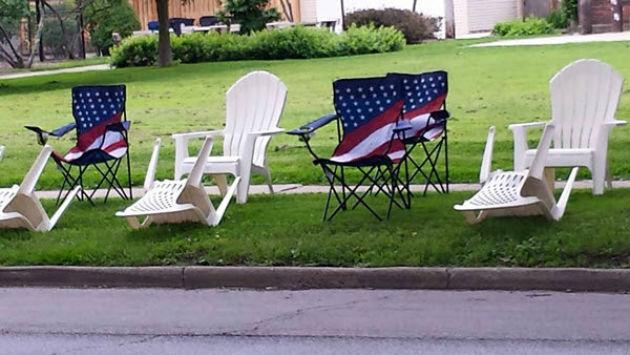 The Fourth of July Parade will not be until Tuesday, so there’s a city ordinance that tells when you’re permitted to place your chairs on the parkway, and if you keep reading this story, you’ll soon know when that magic moment will arrive.

You see, there once was a time when the City Council had more important things to consider than the placement of chairs on the Central Street parkways in anticipation of the Big Parade.

When I moved to Evanston in the middle of the last century, my neighbor down the street, Harry Winn, would pull up his station wagon in front of my house shortly after sunrise on July 4, and I would load a few of my lawn chairs in the back, and we would be off to find a viewing spot.

Other people were doing the same thing, but we knew that somewhere between Central Park Avenue and Dyche Stadium (before it became Ryan Field) we would find a suitable location for our two families to view the parade.

It was always a warm day (this year it’s expected to hit 85 degrees), and we anticipated where the shade would be most advantageous when the parade kicked off at 2 p.m.

As the years progressed, however, citizens started putting their chairs out before the Fourth. At first, it was the day before, then two days before, and before you knew it, chairs began sprouting on the Central Street parkways starting in mid-June.

Finally, the City Council screamed “Enough!”  and the Independence Day chair rule was put into effect.

You’ll find it on the city’s website, but here is how it reads in full:

2. No tape, rope, stakes, or other similar material for the purpose of cordoning off or reserving any area in the parkway shall be permitted at any time. Such materials will be removed by the City. The City is not responsible for loss of or damage to property removed from the parkway. Any person placing such chairs and blankets on the parkway shall assume all responsibility for doing so and by placing such chairs and blankets on the parkway holds the City harmless for any and all consequences of such act.

So you know now that only chairs and blankets are permitted and that it is unlawful to rope off a space for your entire party to assemble later, a practice that continues until this day.

Also, if you’re in a business section of Central Street, where the sidewalk extends to the curb, you are not permitted to put your chairs and blankets there, presumably to avoid inconveniencing customers of the few retail establishments that are open on the holiday.

And note the beginning hour: 6 a.m. on July 1, which this year happens to be this Saturday morning. And you must be out of there by 6 p.m. on Tuesday, July 4.

In the meantime, good hunting and Happy Fourth of July.