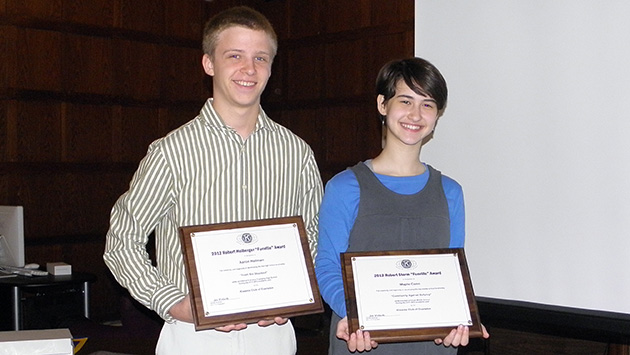 FunvilleKiwanis, an innovative collaboration between the Kiwanis Club of Evanston and Evanston Township High School enters its second year with a broader emphasis on involving the entire community.

The purpose of the project is based on the premise that innovative, creative ideas that encompass something enjoyable or entertaining can engage people in greater numbers, because the project is fun, as well as meaningful.

Two major prizes of $200 for an individual and $200 for a group effort will be given.

Last year’s winning entries suggested a basketball hoop attached to trash containers at parks, making clean up fun. The other winner included a proposal to stop bullies through an improv group which would model ways to stop bullying.

Ted Loda, a member of the planning committee, said, “The students did not want to limit the entries to students. They truly would like anyone in the community to participate, as long as the project benefits Evanston. In honor of the Evanston 150 celebration, it seems fitting that all residents should be included. The project is entitled “Bringing Generations Together”.

Dr. Stamata Blanas, also on the committee, said the cooperation between the high school and Kiwanis, thanks to the assistance from Technology Integration Specialist Dave Chan has been invaluable to the success of Funville.

Entries are open to Evanston residents only and will be based on creativity, feasibility and adherence to the concept that fun can make a positive change in behavior, while building community. They should include a written explanation of the project as well as a visualization of the idea. More information is available online. The contest closes on April 1.

The Funville Awards are named in honor of Robert Heiberger, an ETHS graduate and a fervent supporter of community projects. The Storm award is named for Dr.Robert Storm, a retired veterinarian who has been a Kiwanis member for over 60 years. The Kiwanis credo includes “Serving the Children of the World” which inspired the contest.