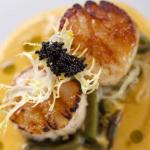 Jacky’s on Prairie, a former French bistro at 2545 Prairie Ave., just off Central Street in North Evanston, will close after New Years Eve dinner, but will reopen January 6 as Hota, featuring an eclectic menu of “flavors from all over the world,” including Spain, France, Mexico, Morocco, and Asia, according to owners Jona Silva and his wife, Erin Silva Winston.

Silva, who has worked at Jacky’s since 2009, said the couple recently purchased the business from David Lipshultz and plans to convert it to a less formal restaurant, ditching the white tablecloths but still keeping the eatery’s signature Dover sole on the menu.

Hota will be open from Tuesday through Saturday for both lunch and dinner. Sundays will feature a brunch from 9:30 a.m. to 2 p.m.  and a family-style dinner after 4:30 p.m., featuring fried chicken among the entrees for $19 per person, although children will be charged their age, if under 11. That is, a 9-year-old would pay $9 and a 6-year-old would pay $6.

The restaurant will be closed on Mondays.

Jona said that Erin, a graduate of the French Pastry School, would be responsible for desserts. She has a friend who owns a farm in Wisconsin who will supply the restaurant with a variety of fresh “farm-to-table” vegetables during the growing season, he added.

Dinner entrée prices will range from $18 to $26, he said, while luncheon entrees will go for $10 to $14. Valet service will be provided for customers’ vehicles for $4 in the evening, but will be free at lunch.