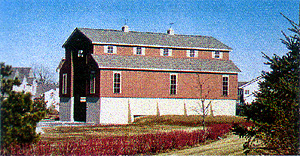 A mountain of salt may be coming to James Park in south Evanston.

An example, from a city memo, of a rectangular salt storage facility. The City Council's Administration and Public Works Committee this week heard a report from city staffers who say the city's two-decade-old salt storage facility needs to be replaced. The current salt dome is in poor repair, they say, and holds only 2,500 tons — not enough to protect the city against sudden spikes in salt prices during times of shortage — like those that have occurred in recent winters. Suzette Eggleston, the streets and sanitation superintendent, said the city needs to be able to store 4,000 tons of salt, or about 80 percent of the 5,000 tons it uses during a typical winter. Eggleston says the current salt dome site, at the municipal services center near the Civic Center, is too small for the larger storage capacity needed. The city has been debating what to do about repairing or replacing the salt dome for over a decade. While the current city salt storage facility has the geodesic dome shape frequently used for such structures, Eggleston says a rectangular building would require about 10 percent less total space. The new building is estimated to cost about $500,000. Alderman Ann Rainey, whose 8th Ward includes the park, urged that a public meeting be held to discuss the proposal and said she anticipates that people who use the community gardens in the park will be concerned about possible damage to the gardens from salt leaking from the storage facility. Eggleston said the staff has also looked into locating the dome on two privately owned sites near the park — the Oakton Shoppes development and the North Shore Towing lot. But both of those alternatives would involve additional cost for land acquisition or property leasing. She says a goal in finding any new site is to keep it as far away from homes as possible to minimize the impact of noise from the operation on local residents. But at the same time, she says, the facility also needs easy access to major roads to be able to operate efficiently during a snow emergency.