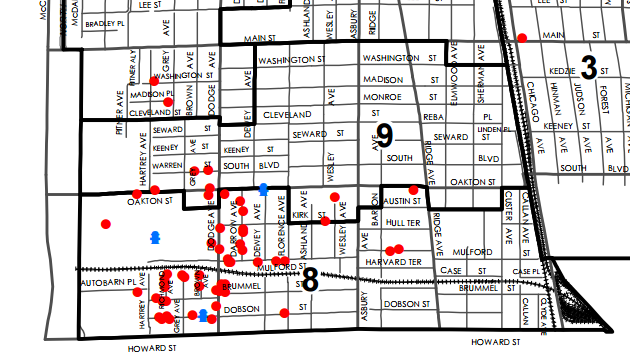 Evanston aldermen Monday night will be asked to approve spending $122,000 on additional tests of water quality around James Park.

The city offered to pay to test the water of residents who requested the service in September after extremely low levels of two coal-tar by-products turned up in samples from four of 15 sites tested over the summer.

And, anticipating additional demand for the tests, Public Works Agency Director Dave Stoneback says staff plans to submit a budget amendment to do an additional $125,000 in testing next year. 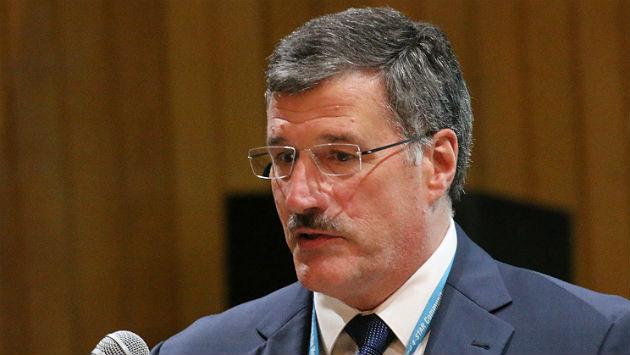 At a community meeting in September, Stoneback stressed that the highest level of the two chemicals — phenanthrene and fluoranthene — found in the water samples was more than 1,000 times lower than the limits set for them in drinking water by the Illinois Environmental Protection Agency.

But that hasn't stopped some neighborhood residents from sounding the alarm about possible hazards from the water — and a group plans to submit petitions to aldermen Monday night asking that all the water mains in the neighborhood be replaced.

The city, which has 157 miles of water mains, currently replaces about a mile and a quarter of the mains a year at a cost of more than $5 million annually. 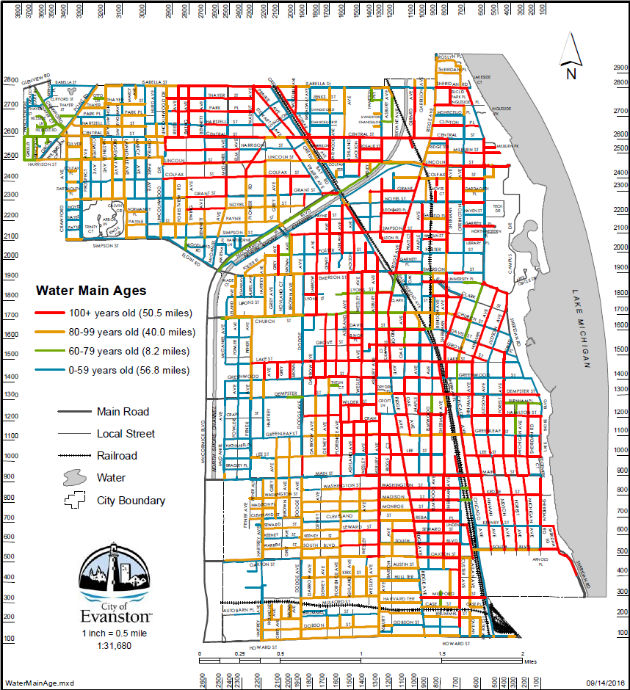 A map showing the age of the city's water mains as of this year.

More than half the mains are now over 100 years old — the typical estimated life for a water main.

The mains in the James Park area are listed on city maps as being considerably newer than the average — having been installed 80 to 99 years ago.

Update 5:10 p.m.: Stoneback says there are other factors besides age to consider in determining which water mains to replace first.

Evanston’s top priority is to replace water mains that have had frequent failures (main breaks), then if the water main should be increased in size to provide better flow to meet fire flow conditions, and then based on age of the water main and if street improvements are planned, he says.

Some of the water mains that are 80 to 99 years old are in worse condition than the 100+ year old water main, he added. And water mains east of Ridge Avenue are old, but because they are in sandy soil, they don’t seem to deteriorate as quickly as the water mains in clay, moist soil elsewhere in the city.

If the area for a total water main replacement project were defined as from Oakton Street to Asbury Avenue to Howard Street to the west city limit, that would involve close to 10 miles of water main, with a likely replacement cost in the neighborhood of $40 million.

The city has already spent more than $1 million on outside legal fees pursuing a lawsuit claiming that the utility companies ComEd and Nicor are responsible for the presence of the coal tar by-products as well as for methane gas found around James Park — which the city's suit claims leaked from a goal gasification plant predecessor companies to the utilities once operated at Oakton Avenue and McCormick Boulevard in Skokie.

Were the city to win the suit, it might be able to force the utilities to cover the cost of remediation efforts, which might include water main replacement.