The work of Eve J. AlfillÃ© is art that is not confined to the walls of a museum. 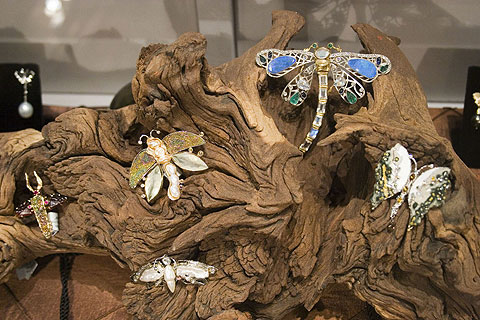 Pieces from the "Entomology 101" series are displayed at an unveiling of her fall collection this month. (Allison Williams photos)

AlfillÃ©, whoseÂ studio is located at 623 Grove St. in downtown Evanston, says, "As an artist, I chose jewelry because it harkens back to humankind's very beginnings: If you were a prehistoric person, walking on a beach or in the forest, and you suddenly found a small, mysterious, wonderful glowing thing, a pearl, a gem, what would you do?"

Similar to life, Eve finds jewelry to be based not solely in the present but weighted with the past and future. "I like to work with hard media. I was always interested in working with things you have to fight against." Utilizing things such as a fossil ammonite and a modern cut diamond, AlfillÃ© combines the science of discovery with the art of jewelry making.
Walking into the Eve J. AlfillÃ© Gallery and Studio is much like a trip to a natural history museum. Pearls from the Mississippi bed, Japan and Tahiti are on display near a wall lined with shells discovered on years of vacations. Looking at her jewelry and creations, you can't help but think of ancient civilizations.
As a child she was fascinated by the animated movie "The Stone Flower". AlfillÃ© was inspired to create a gallery space to look like magical caves. explaining the idea of a place full of things you've always wanted but never been able to have.

"There is no minimalism [in the gallery]. We don't live like that," AlfillÃ© says. Entering the pearl, gem and diamond rooms becomes more of a personal experience than a business transaction, taking you from the product to the thoughts behind the art.

Her recent show, "Entomology 101", illuminates Eve's years of working as an archaeologist and her interest in the passage of time. She began to study insects and their life spans and became interested in the fact that their entire existence lasted only two days. "It makes you wonder what you are doing with you life", she says. All of the pieces in the gallery are handmade. They range in price from $65 to $23,000.
But just looking at the pieces is not enough. AlfillÃ© says she believes "Art is not a process, but a thought. It starts with an idea." Steeped in history, the pieces are meant to change your ideas of what jewelry really is.
Alongside her life as a jewelry designer, AlfillÃ© is also a poet, teacher and sculptor. In 1990 she started The Pearl Society and is also interested in raising public awareness about these gems and to assist in preserving their endangered habitat.