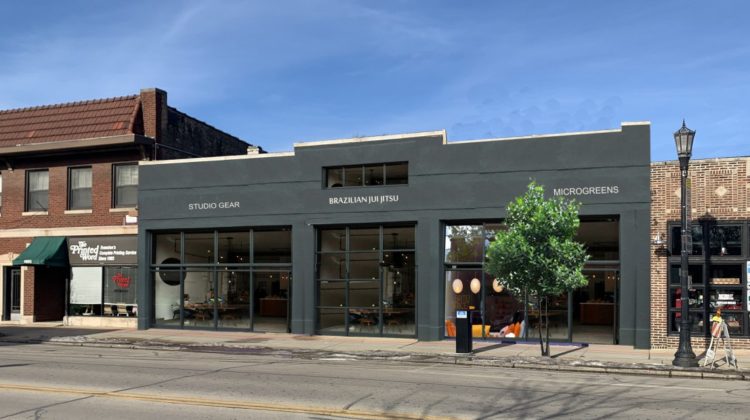 A rendering of the planned remodeling of the 1803 Central property.

A Brazilian Jiu-Jitsu studio is planned to take over the long-vacant site of a former auto transmission repair shop at 1803 Central St.

Developer Jim Hennessey told Evanston’s Design and Project Review Committee this afternoon that the site will also include two retail storefronts. Tentative plans call for a microgreens restaurant and a fitness equipment shop in those spaces.

The the transmission repair shop closed more than a decade ago, and new owner Hennessey says the property has suffered from a variety of structural issues since then, including a partial roof collapse.

Hennessey said he plans to completely reroof the building — preserving the bow-truss structure in the front section, but switching to a flat roof at the back, to be able to more easily attach mechanical equipment to the rear section of the roof.

He said the Jiu-Jitsu studio, which would be run by Jeff Serafin, who operates Serafin Brazilian Jiu-Jitsu at 2306 Main St., would have an entrance at the center of the building’s Central Street facade, but most of its space would be toward the rear of the building, behind the retail shops.

In response to questions from the committee, Hennessey said he plans to lease parking spaces from the city for employees and that most of the time customers will be able to park in Northwestern University’s Ryan Field parking lot.

Rob Sheppard, who lives across the alley from the site at 1730 Chancellor St., called it “an exciting project” and said that after living across from the vacant building for a long time, “We’re very keen for your project.”

Alderman Eleanor Revelle, 7th Ward, said, “It’s really exciting to get a new business going on that spot. IT has been really needing something for quite a few years now.”

The committee voted to give a favorable recommendation for the project to the Zoning Board of Appeals with conditions for sound attenuation, if needed, and submission of a more detailed plan for parking and installation of a bike rack near the storefronts.

The special use permit for the project will ultimately require City Council approval.

Over the years the vacant building had mentioned as a possible relocation site for the Bluestone Restaurant and a brew pub. But those plans fell through.

Update 2/17/21: The Zoning Board of Appeals voted 5-0 Tuesday night to recommend that the City Council approve the project.