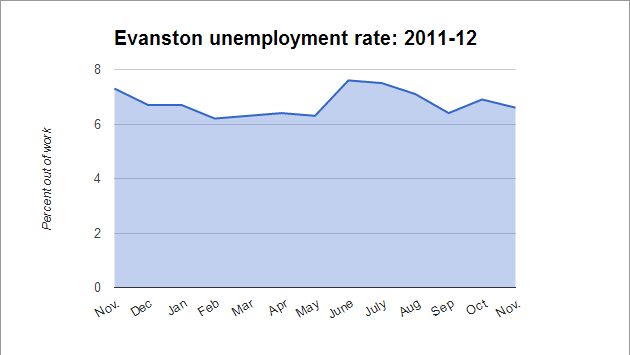 The last jobless report of the year shows Evanston's unemployment rate at 6.6 percent — lower than the 7.1 percent was a year earlier, but just barely below the 6.7 percent average for the past 12 months.

The numbers, for November, show 2,746 Evanstonians looking for work, down from 2,926 in October. But the size of the labor force dropped even more — from 42,115 to 41,536 — as some people became discouraged and stopped looking for work.

The rate for the Chicago metro area was unchanged at 8.3 percent from October to November. That was down from 9.3 percent a year ago.

Twenty-three of the nearly 100 towns in Illinois with more than 25,000 residents had lower unemployment rates than Evanston in November.

Wilmette had the lowest jobless rate, 5.4 percent.Highland Park at 5.6 percent and Glenview at 5.8 percent were the only other towns with rates under 6 percent.