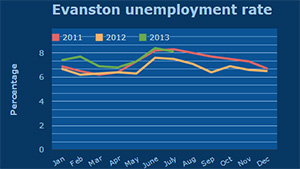 The June rate was the highest in more than three years.

In the tri-state Chicago metro area the jobless rate fell from 10.1 to 9.6 percent.

Among the nearly 100 Illinois communities with a population of 25,000 or more, Highland Park had the lowest unemployment rate in July at 6.3 percent. Wilmette was at 6.7 percent and Glenview and Mt. Prospect were tied at 7.1 percent. In all, 30 towns on the list had a lower jobless rate than Evanston in July.