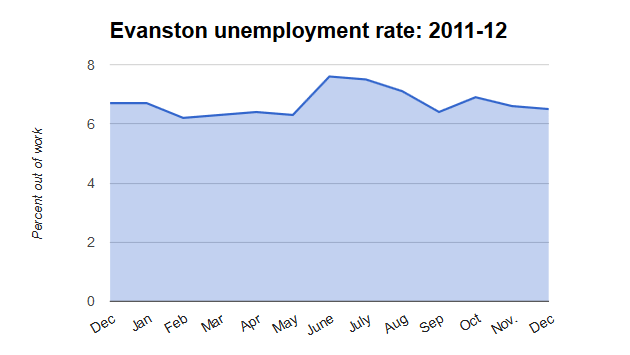 The first jobless report of the new year shows Evanston's unemployment rate was at 6.5 percent in December, down just a tenth of a percent from the month before and two-tenths of a percent from a year earlier.

The rate for the Chicago metro area rose to 8.6 percent from 8.3 percent in November. A year ago it stood at 9.3 percent. The numbers were the same for the entire state of Illinois.

Nineteen of the nearly 100 towns in Illinois with more than 25,000 residents had lower unemployment rates than Evanston in December.

Wilmette had the lowest jobless rate, 5.2 percent. Glenview was at 5.5 percent, Glen Ellyn at 5.6 percent and Highland Park at 5.7 percent. The only other communites with rates below 6 percent were Park Ridge and Wheaton, which were tied at 5.9 percent.