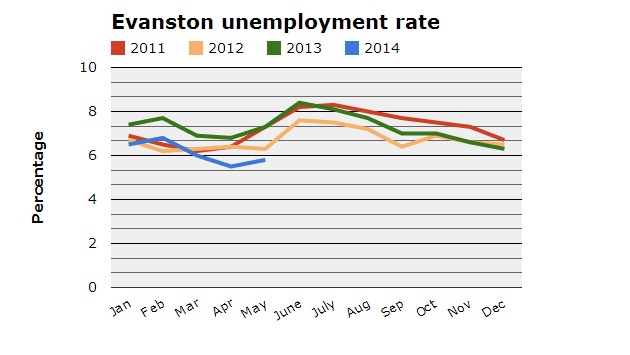 The unemployment rate in Evanston rose last month to 5.8 percent, from 5.5 percent in April. But it was down sharply from 7.3 percent a year ago.

Data from the Illinois Department of Employment Security released today shows that of the more than 100 cities in the state with over 25,000 residents, 21 had jobless rates lower than Evanston last month — with the lowest rate, 4.9 percent, recorded in Glenview and Glen Ellyn.

Among the other towns with lower rates were Highland Park at 5.1 percent, Wilmette at 5.4 percent and Oak Park at 5.5 percent.

Across all of Illinois the jobless rate averaged 7.2 percent, unchanged from the previous month and down from 8.8 percent a year earlier.

The metro Chicago rate was 7.2 percent, down from 7.3 percent in April and from 9.0 percent a year earlier.