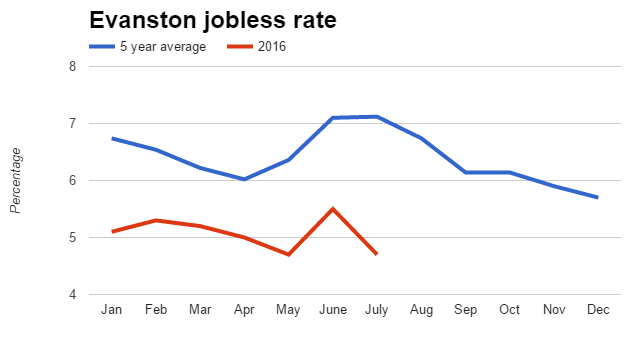 The jobless rate in Evanston fell back to 4.7 percent last month after spiking to 5.5 percent in June.

Figures from the Illinois Department of Employment Security show unemployment in Evanston hasn't been any lower since last December, when it was 4.4 percent. A year ago the jobless rate here was 5.2 percent.

The number of Evanstonians with jobs increased by 154 last month while the number of those without jobs declined by 354 — which means 200 people left the labor force in July who'd been working or looking for work in June.

Twenty-nine of the 107 Illinois communities with more than 25,000 residents had jobless rates lower than Evanston's in July — that's down from 49 in June.

Glen Ellyn and Highland Park had the lowest jobless rate in the state, 4.0 percent, in July. Wilmette was at 4.1 percent and Skokie was tied with Evanston at 4.7 percent.

The worst jobless levels in Illinois last month were in Harvey at 10.9 percent, East St. Louis at 10.2 percent and Dolton at 9.4 percent.