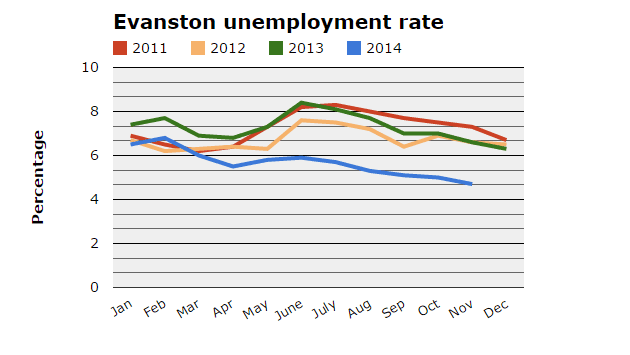 In a bit of cheerful news just before the Christmas holiday, the Illinois Department of Employment Security today reported that Evanston's jobless rate fell to 4.7 percent last month from 5 percent in October.

It's the first month in several years that the jobless rate here has been below the 5 percent level and continues a pattern of declining joblessness that has generally been the rule this year.

Of the just over 100 communities in Illinois with more than 25,000 residents, 26 had jobless rates lower than Evanston last month. That's up from 24 with better rates in October.

The lowest jobless rate in the state — 3.9 percent — was found in Elmhurst, Glenview and Northbrook. Downers Grove, Mount Prospect and Wilmette were at 4 percent. Arlington Heights and Wheeling were at 4.1 percent.

The worst jobless rates in the state last month were in East St. Louis at 11.8 percent, Kankakee at 10.7 percent and Harvey at 9.5 percent.