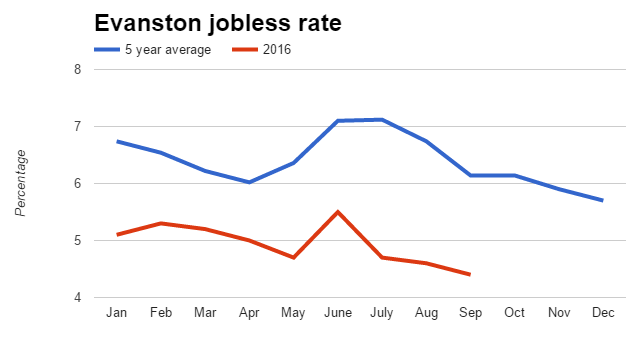 Figures from the Illinois Department of Employment Security show the rate was down from 4.6 percent in August, but up slightly from 4.3 percent a year ago.

However the number of Evanstonians with jobs actually declined, from 38,351 in August to 38,096 in September as seasonal employees returned to school. But the number of jobless workers declined from 1,829 to 1,772.

The metro Chicago jobless rate also fell in September to 5.2 percent from 5.4 percent in August, but was up from 5.1 percent a year earlier.

The statewside jobless rate in September declined in September to 5.4 percent from 5.5 percent in August, but was up from 5.3 percent a year ago.

Twenty-seven of of the 107 Illinois communities with more than 25,000 residents had jobless rates lower than Evanston's last month.

Wheeling had the lowest jobless rate in the state at 3.8 percent, Wilmette was at 4.1 percent, Skokie's rate was 4.5 percent.

The worst jobless rates in the state were in East St. Louis at 10.4 percent, Harvey at 9.8 percent and Dolton at 8.9 percent.